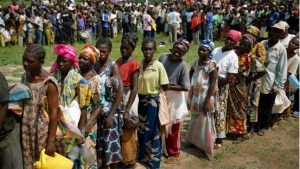 Two victims have been confirmed dead at the  internally-displaced persons camp in Benue State, according to officials on  Wednesday.

One of the victims was a two-year-old girl whose name was not immediately made available as at the time of releasing this report on Wednesday.

She died at the IDP camp run by Terkura Suswam, a politician and founder of Ashi Polytechnic in Anyiin, Logo Local Government Area.

Mr. Suswam told newsmen that he the girl died at a hospital in Anyiin following complications last week. He had been running the camp because the government was unable to take in all the victims of the January 1 attacks by suspected herdsmen.

Logo was attacked alongside Guma Local Government Area, leaving more than 100 persons dead between January 1 and 8. At least 72 of the victims were given mass burial by state government on January 12 in Makurdi, the state capital.

The second victim, 62-year-old Ortoho Tordwen, died last week at the IDP camp in Ugba, the seat of Logo LGA, according to Amande Tsea, a senior official at Benue State Emergency Management Agency.

Mr. Tsea said he couldn’t immediately remember the date that the victim died, but added that he passed on at the hospital following a heart attack, all the victims have been buried.

About five camps are currently opened across Benue where the state government is providing food and shelter for the displaced victims. There are also at least three IDP camps in neighbouring Nasarawa State, all opened for victims of ongoing farmer-herdsmen violence.

But the camps are rife with complaints of food shortages and lack of water or even proper sanitation.

It was learnt from many of the camps’ residents during a visit there earlier this month that food and other supplies were being shared first amongst leaders in the communities who were not displaced by herdsmen attacks.

There were also allegations that camp officials were stealing or hoarding supplies.

Governor Samuel Ortom told newsmen last week that the chances of emergency personnel stealing from the IDPs was low, but said any official caught would be “severely dealt with.”