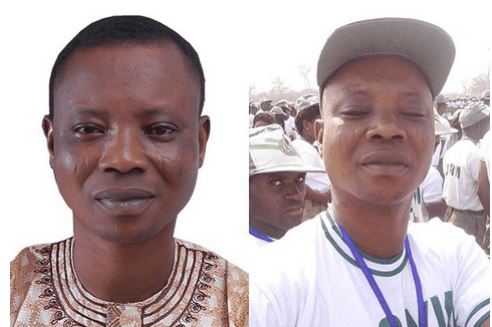 Actor, Owolabi Ajasa, took Nigerians by surprise when pictures of him in the National Youth Service Corps orientation camp in Kogi State were posted online.

Many felt that he was above the age of 30 and should have applied for an exemption from the service.

However, in a chat with Sunday Scoop, Ajasa explained his reason for answering the ‘clarion call.’

“It is a simple matter. It all depends on the time you finish your tertiary education. If you are over 30 at that time, you can choose to seek exemption from service but I chose not to do that.

I also decided to ‘serve’ because I am the first graduate in my family and it really meant a lot to me. That’s why I wrote on social media that I broke a jinx in my family by observing NYSC.

“I attended Moshood Abiola Polytechnic in Abeokuta, Ogun State, and I studied Marketing. As filmmakers, marketing is also part of our job.

Though there are people who market our films, it is not a crime if we sell our films ourselves. I still have plans to return to school to study more because knowledge always keeps evolving.”

Speaking on his experience in camp, Ajasa said, “It was a very great experience.

I met many youth corps members and we interacted well. We had a lot of fun times together. I wasn’t really treated like a celebrity in camp.

Most of the officials in the Kogi camp were from Benue State and many of them didn’t recognise me because they don’t watch Yoruba movies since they don’t understand the language.

“The corps members, especially the ones of Yoruba extraction, knew me well and they always wanted to take pictures with me.

At a point, the officials felt uncomfortable with the attention I was getting because even during parades, people wanted to take pictures with me.

They asked me why people were always taking pictures with me and some corps members then told them that I am a celebrity Yoruba actor and producer. From then, the officials started according me respect.”

The actor also argued that the national service wouldn’t disrupt his movie career. “After the orientation exercise, I redeployed to Abeokuta in Ogun State, because I have to be close to my family.

My place of primary assignment is the Abeokuta South Local Government Secretariat in Ake, and I also observe my community development service in the Pansheke area of the state.

“I am ready to serve Nigeria for the next one year but I have worked everything out to make sure that NYSC does not disrupt my career,” he said.

Going down memory lane on how he got his breakthrough in the movie industry, Ajasa said, “The film that brought me to limelight was the one I produced titled, Adanwo Olopa (Trial of a policeman).

After that particular production, I have acted as a policeman in 95 per cent of all the movies I have appeared in.

People often cast me as a police officer because they believe I portray it well.

I often meet with real policemen to ask about the intricacies and technicalities of their job. They give me advice on how to act as a policeman and that has helped me a lot.

I have also played many other roles though I was brought to the limelight by acting as a policeman.”