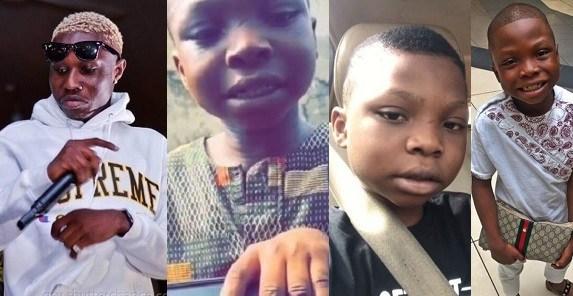 So Late Last Year We Heard So Many Rumours Linking Segun Wire To Be Back On The Stret Begging After His Famous “Mo Fe Ma Chache Video” People Has Called Out Zlatan Ibile The Guy Who Found Segun Wire Amd Has Been His Sponsor For So Long For Not Taking Care Of The Little Lad Anymore.
What Could Possibly Be Wrong?
Zlatan Ibile Shares The Real Story Behind All these .
As Said On His Instagram Account.

On the 24th of February 2018 Zlatan Ibile decided to take a legal action against the family of segun wire, as the family use him as an extortion means of making money off the boy’s famous status (there is an actual proof of this event ,as segun wire was found sending a voice note extorting a well wisher of 85k there by framing Zlatan of not paying the present term school fees which in fact there is a receipt issued of the school that zlatan has payed since November last year )

So after reporting this incident to human rights authorities!! They decided to invite segun wire’s family in for questioning to hear from both sides but on getting to their house for invite with the two representatives of human rights for questioning they refused out of ignorance and decided to take law into their hands by molesting zlatan and his manager and as well chased away the two law representatives . Segun Wire’s mum stripped her self Unclad in framing Zlatan of beating her so the hoodlums would beat him and his manager! She also wen further to accuse Zlatan of collecting the some of 2million Naira from the likes of davido and Olamide Who they claimed has assisted segun wire with finance …. Further more Zlatan and his manger where dragged to an undisclosed camp of hoodlums for mobbing it took the intervention of the law enforcement to safe the situation there by arresting the culprits …. As it is the culprits are apprehended and segun wire’s family who instigated the entire event are being questioned for their actions and henceforth Zlatan ibile’s family has instructed him to desist from rendering kindness to the family of segun wire as they don’t appreciate the value so therefore Zlatan has officially withdrawn from the brand segun wire … All evidence attached are
School fees receipt for the said term segun wire family lied that Zlatan has not paid for the term which is false
And secondly this is the video of Zlatan empowering segun wire’s mum with the sum of 50k to start a business in providing further for the family!! She squandered it and went back begging.