The parents of Big Brother Naija 2018 housemate, Bambam, have reportedly reacted to the video clip of her and Teddy-A having a hot intercourse, which made rounds on the social media.

TORI News had reported yesterday that the reality television stars were caught on Tuesday morning by the cameras making out in the toilet, in a video which stirred up reactions online.

A family member of the embattled housemate identified as Fisayo Awonuga, took to her Twitter page (@FisayWonug), and revealed that Bambam’s parents are furious after her toilet escapade, and have demanded that she should be brought back home.

According to the family member, Bam Bam’s parents who are staunch christians have met with the organizers of the show, Multichoice Nigeria and asked that she should be immediately evicted. The family also met with Teddy-A’s mother in a bid to iron out issues.

Here are the Tweets as captured online by InstaBlog9JA: 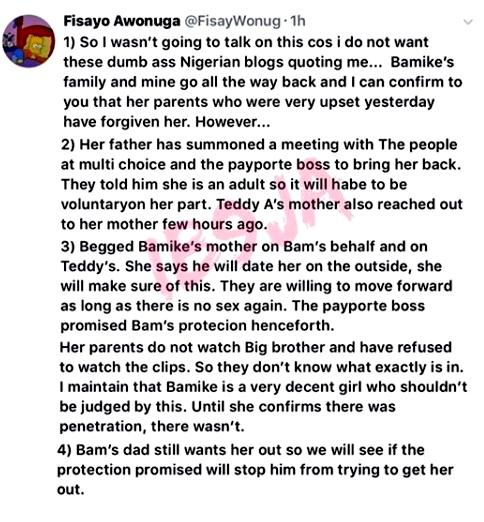