#BBNaija: Throwback video of Lolu telling Ebuka in Anto’s presence that he has a girlfriend outside the house

Nigerians have dug out a video from the debut of the #BBNaija show where Lolu told Ebuka in Anto’s presence that he has someone around the corner but that he might also fall in love with someone in the house. 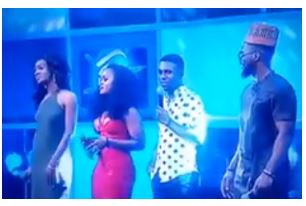 Watch the throwback video below

Share
Facebook
Twitter
WhatsApp
Previous articleJust like Beyonce! Watch Tina Knowles show off her moves while dancing with her husband
Next article“None of una go die better” Charly Boy criticizes the government for fighting Nnamdi Kanu yet failing to do same to herdsmen and Boko Haram
- Advertisement -