Home Local News BREAKING News: Rescued Dapchi Schoolgirls Sing National Anthem As They Meet Buhari...
Facebook
Twitter
WhatsApp
The Dapchi schoolgirls who were returned home by Boko Haram terrorists on Wednesday, have been airlifted to Abuja aboard a military transport plane, and are meeting with President Buhari in Aso Villa, Abuja. 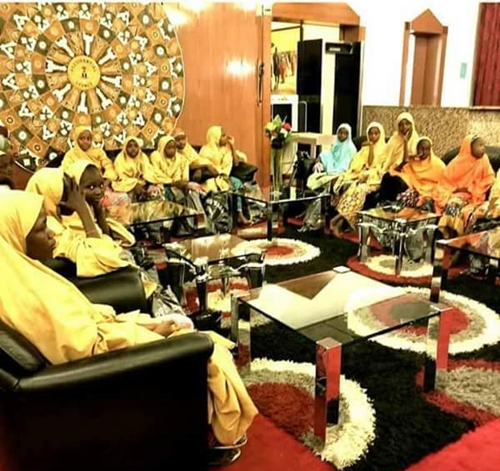 President Muhammadu Buhari is currently receiving the Dapchi schoolgirls who were released on Wednesday by Boko Haram.

The girls were flown to Abuja on Thursday. They received medical evaluation and were debriefed before meeting the president.

President Buhari is meeting the girls at the press gallery of the State House presidential villa , Abuja.

The freed Dapchi Girls are here. President @MBuhari will be meeting with them shortly. pic.twitter.com/guWENPlNJM

TORI News had reported on Wednesday that the over 100 schoolgirls who were abducted at their school in Dapchi, Yobe state, on February 19, 2018, were released by Boko Haram terrorists early on Wednesday morning.

We’ll bring you details from the meeting later….