Home News Feed Community In Shock As Leopard Wanders Through Town, Attacks Man On The...
Facebook
Twitter
WhatsApp
A report by Daily Mail UK shows that an enraged leopard that became trapped in a house mauled one man and attacked several others in a terrifying unbridled rampage.

The big cat got stuck in the city of Indore, India, on Friday morning after straying into the town overnight.

Waking up to discover the predator prowling down their street, petrified residents battened down the hatches and holed up in their apartments for several hours.

Help was soon at hand as a large crowd flooded the Pallav Nagar area in a bid to drive the leopard away.

Their efforts took a sharp turn for the worse, however, when the big cat mauled one of their number.

Dramatic footage captured at the scene shows the incident unfolding.

The video, shot on a camera phone from the other side of the street, shows several men attempting to cast a net over the entrance to a house.

Dozens of people can be seen gathering in the street to aid the efforts to lock down the beast until the authorities arrive. 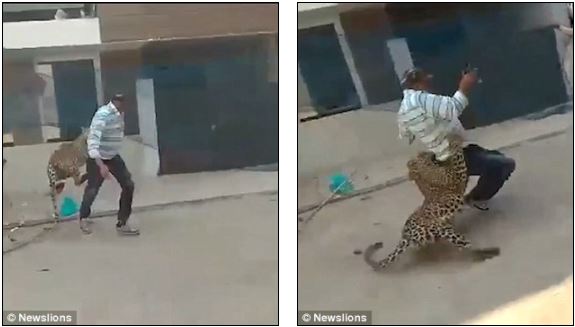 But before they can completely cover the building with the net, there is a sudden movement from inside the house.

Suddenly the leopard emerges and leaps over a gate before ducking under the net and throwing itself at the nearest volunteer.

The man makes a brief effort to escape but he quickly realising it was in vain as the vengeful animal hurls him to the ground.

Luckily for the stricken onlooker, the leopard then decides to chase off the other helpers, leaving him lying in the road.

Forest Department officials were eventually informed of the incident and arrived at the scene 20 minutes later.

But even they found it very difficult to trap the agile beast.

They finally managed to use tranquiliser darts to sedate the animal and capture it. Although they missed the target five times before eventually hitting the cat.

The leopard was rescued after three-hour long operation and shifted to the local zoo for first aid and treatment for trauma.

According to forest officials, the leopard must have strayed into the city from the Ratapani Tiger Reserve, around 150km away.