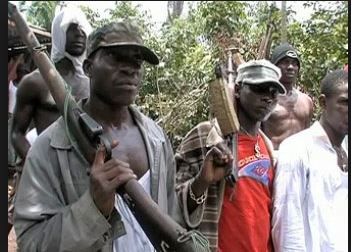 Eight passengers were reportedly kidnapped on Thursday by some gunmen who hijacked a bus on Igboho-Igbeti Road, Oyo State.

A source said the kidnappers emerged from a bush at the Old Oyo National Park and stopped the bus. They asked passengers of the vehicle to alight.

He said the victims were forced into a vehicle that the hoodlums parked by the roadside, adding that the the bus occupants were from Igboho and Ogbooro towns.

“We have had cases of one or two people being kidnapped in this area before. They were released after ransoms were paid. This is the first time all passengers in a bus would be kidnapped. Other road users have abandoned the route for fear of becoming victims of those hoodlums,” he added.

He said the Commissioner of Police in the state, Abiodun Odude, had deployed men in the area to search for the victims.

Ajisebutu said, “We are aware of the incident, but it was only two victims that were involved. We have dispatched our men to the area to fish out the kidnappers and ensure the rescue of the victims.”