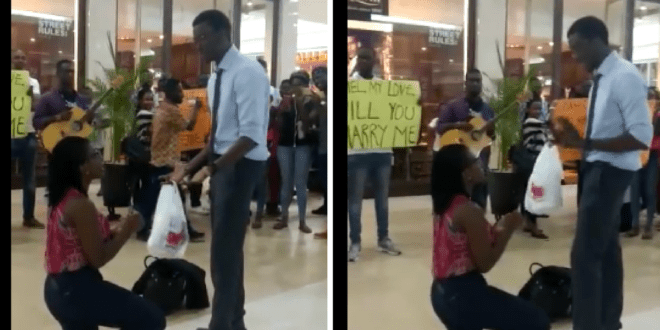 This is the situation with these lovers who set out to go on a date at the Accra Mall. At the mall, the two who had dated for six years created a scene when the girlfriend proposed to his guy and things turn sour.

MandyNews.com has chanced on a viral video of a woman proposing to her man she has dated for six years.

However, the man rejected her proposal although there were several efforts by the woman and people around to get him to accept to marry her.

Watch the video below…

Share
Facebook
Twitter
WhatsApp
Previous articleJAMB and Official Makes U-Turn, Says N36M Collected By Her Superior And Not Snake
Next articleG-Worldwide Now Allows Me Feature With Other Artistes – Sugarboy
- Advertisement -

Empress Gifty Adorye, a multi-award winning gospel singer has advised her fans not to take their marital problems to their pastors because most clergies...
Read more
- Advertisement -