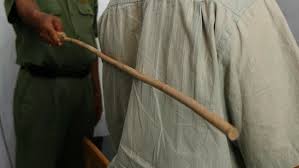 Suspect to be punished by caning

A Karmo Grade 1 Area Court, Abuja, on Friday ordered that one Loveth Matidon, be given four strokes of the cane, for giving false information.

Matidon, who resides at Wuye, Abuja, had pleaded guilty to the two-count charge of giving false information and defamation leveled against her.

The judge, Alhaji Abubakar Sadiq, gave the order after the convict pleaded guilty and begged the court to temper justice with mercy.

Sadiq said that the court might not be lenient with her the next time she was brought before it.

The prosecutor, Zannan Dalhatu, had told the court that the matter was reported by the convict at the Utako Police Station Abuja, on Feb. 27.

Dalhatu said that the convict, on that same date, reported that she dropped her three-year-old son at the Mountain of Fire and Miracles Ministry, Abuja, but could not locate him, when she returned.

He said it was revealed during police investigation that she kept her son somewhere, went to the church and claimed he was missing.

The prosecutor said the offences contravened Sections 178 and 288 of the Penal Code.