Home News Feed Parents Of Abducted Dapchi Schoolgirls March To National Assembly…Find Out Their Demands
Facebook
Twitter
WhatsApp
Parents of the abducted schoolgirls in Dapchi, Borno state who say they have been going through a heartbreaking experience since the abduction of their daughters, have stormed the National Assembly, Abuja. 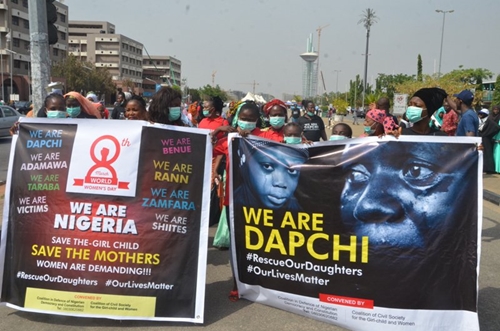 Parents of the Dapchi schoolgirls abducted by Boko Haram insurgents have trooped to the National Assembly Abuja, demanding the immediate rescue of their daughters from the custody of the terrorists.

According to Vanguard, the parents of the missing girls who on Thursday, March 8, stormed the Assembly complex, complained that they have been going through a heartbreaking experience since the abduction of their daughters. 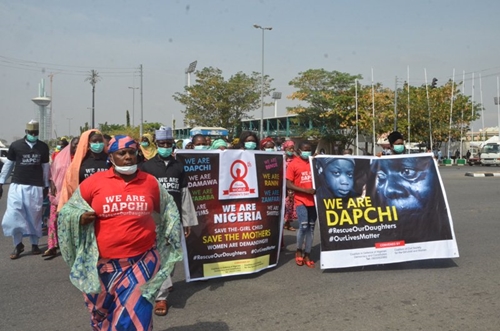 The grieving parents who wore black shirts with inscription: “We are Dapchi People”, said that they were at the Assembly to demand the rescue of their daughters and not to criticise and attack the government.

A father, Yahaya Taributu, who was among the protesters, said three of his daughters were among the girls abducted by the terrorists. “Government should go and bring back our daughters”, Taributu said. 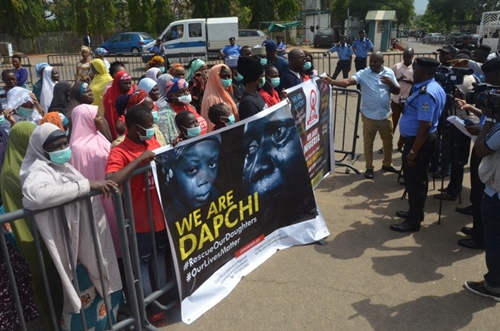 Another parent, Aisha Alhaji Bukar, said her daughter was also abducted, adding that she has not been sleeping or eating well since the incidence.

The parents insisted that the security of their town had been very porous, indicating that they were not surprised that their daughters were carted away easily by the terrorists.