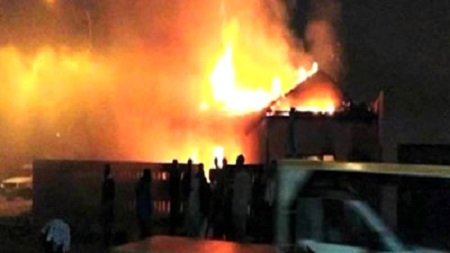 According to a report by Daily Sun, a mysterious fire recently consumed goods worth over N1 billion at the Summit Warehouse on 36, Alaba International Market Road, Ojo, Lagos.

It was an incident that brought sadness to the management and hundreds of employees of Ralph-C Electronics Limited as well as other companies using the warehouse.

The day had started on a cheerful note for the employees. But before the close of the day’s business, the inferno, whose source was yet to be traced at the time of filing this report, destroyed all the goods, including musical equipment, air conditioners, refrigerators and generators in the warehouse.

Ralph-C Electronics Limited, the sole distributor of Peavey musical equipment in Nigeria, was one of the tenants. The others were I.O. Bros. Ltd, Christsonac Nigeria Ltd and E.M. Michael Nigeria Ltd.

It was gathered that new consignments had just arrived the warehouse.

A witness, who identified himself as Ndubuisi, said how the place got razed was still a mystery.

According to him, the facility was not connected to electricity and there was no source of electrical current.

Ndubuisi said: “The million-dollar question on the lips of many sympathisers is, what was the source of this satanic fire that licked over a billion naira worth of goods, since the building was not even wired for electricity? There was no generator power source, no candle, there was no fuel or kerosene in or around the building, and there was no inflammable material.

“Apart from the workers, there were hundreds of people who don’t have shops in the market, but served as go-betweens for buyers and the owners of the good. They eked out a living from here. And now that the warehouse with the goods is gone, they are now in the labour market. They are as affected as the owners of the goods, because that was the source of their daily income.”

The workers and the middlemen wept profusely as they helped the fire fighters from Ojo Local Government Area and others, who battled in vain to put out the fire.

One of them, Emeka, told Daily Sun that though he didn’t have a shop in the market because of the high rent involved, he had been acting as a middleman between the shop owners and buyers and had been making some money, which had been keeping his family going.

He said: “Where do I begin from here? I don’t have a shop, but here I have been making some money daily, which has kept my family comfortable. It is not only the owners of the goods that are bereaved, myself and others who don’t have shops but depended on this place for our daily income are also losers. Where do we go from here? We have been thrown into the labour market.”

Our reporter gathered that preliminary investigation confirmed that the inferno was noticed from the partitioned section belonging to Ralph-C Electronics Ltd by the chief operation officer of the company, Mr. Vinatus Umuoha.

Umuoha said, because of the intensity of the heat,that day, he had gone outside the warehouse with his colleague, Mr. Simeon Udeh, around 3.30pm to have some fresh air. While there, they noticed flames coming from one of the four entrances to the warehouse.

“We tried to run inside to see what it was, but we couldn’t go far because of the intensity of the fire. We ran back to fetch water to see if we could put it out, while one of us ran to alert the fire servicemen at Ojo Council, which is a stone’s throw from here.”

When asked what could have caused the fire since there wasn’t any inflammable material, and the warehouse had no electric power source, he said the source of the inferno had remained a mystery.

“I don’t know what might have caused the fire. We don’t have any power source in the warehouse and we have not used our generator for more than one week before the incident took place,” he said.

Mr. Ndukwe Ndubuisi, a security supervisor corroborated Umuoha’s story: “Unfortunately, we could not save anything from the warehouse because the fire came suddenly and it was very fierce. When people raised the alarm about the fire, we were thrown into confusion, as we tried to fetch water to salvage the situation. But we couldn’t do much before the fire servicemen arrived to help. It wasn’t long before they ran out of water and we resorted to buying water from water tanker vendors. Yet all the four companies lost all their goods to the fire.”

The CEO of Ralph-C Electronics Ltd, Mr. Ralph Chinedu Obi, appealed to government to provide for hydrants in business areas.

“We probably wouldn’t have lost all of our goods if water was readily available. Some of our goods would have been salvaged,” he said.