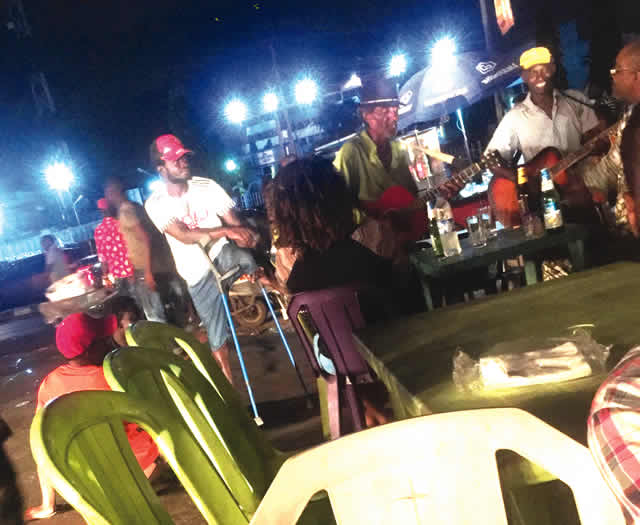 With lovely music blaring from gigantic loudspeakers mounted at every corner of the joint, James in company with his friends revelled at the cool bar, jam-packed with other fun seekers.

Time was 1am, at a joint close to Balogun Bus Stop, on Obafemi Awolowo Way, Ikeja, Lagos. James, who had been lured from his base on the Island by his friends to come and have a taste of nightlife on the Mainland, said he arrived at the venue at about 12 am, a time some others would already be in bed.

It was a moment to celebrate, having just secured a rich contract he had worked so hard to get. Thus, from his first bottle of beer to when the table became filled with empty bottles, he and his friends gulped down different kinds of beer, side by side hot, spicy fish pepper soup. Also, the presence of club girls, all in skimpy, provocative dresses, shaking their bums and entertaining the teeming revellers made it all the more interesting.

By the time James and his friends left the premises around 4:05 am, it had been an exciting evening for them. They all managed to drive home in one piece. But it was until James woke up later in the morning that he realised that he forgot his diary – a book he said he could never joke with – at the bar.

Thus, the following morning, James said as early as 8:16 am, he hurriedly left his house at faraway Ajah for Ikeja to look for the diary.

But, on getting to the place where he spent the better part of the previous evening, just a few hours earlier, the entire premises had worn a new look, such that James missed his way several times.

He said when he visited the previous night, the space in front of the main building on the premises was like an open field, devoid of cars and filled with tables and plastic chairs, arranged in threes and fours.

He also said there were blue lights everywhere and the entire place looked colourful and attractively noisy. But the following morning, which was a Wednesday, it had become a different place entirely. And to anyone visiting the place for the first time, nothing suggests that the place could become a bar.

“Coming from Allen roundabout, I passed the spot about three times, looking for the exact place, but I couldn’t place it,” James said in a chat with Saturday PUNCH. “At a point, I almost drove into a compound on the right side, but there were labelling of different offices on the building, so I knew I was entering the wrong place. I didn’t see any of that the previous night.

“I had to keep driving back and forth and each time, I had to go back to Allen Roundabout to make a U-turn, so I could start looking out for the place immediately after Airport Hotel, which was the only place I could remember on that route. Remember I got there at night and I wasn’t very familiar with the place.

“I got confused and I had to ask myself if I had yet to recover from the hangover. Beyond the need to retrieve my diary quickly before it would be lost, I was disturbed that I could no longer trace what hitherto appeared traceable.”

After much back and forth, James said he drove into a bank in the area to ask for direction, perhaps anyone would understand he knew what he was saying.

“After asking me to describe the place, one of the security men simply pointed at one building close to the bank. Guess what? It was the same building I drove into earlier, which had changed into an administrative environment. I ran to the place, and truly, it was the place I was looking for all along because I was able to recognise one of the attendants and then I saw the chairs neatly packed in one side of the premises.”

Understandably, James said he marvelled at the transformation that had taken place at the premises. “I couldn’t believe it until they brought out my diary,” he added.

Unknown to James and many others who only ply such routes at a certain time of the day, this is the mixed use of this premises – office space during the day and joint at night – every day of the week. And in fact, it has become a popular spot for people who want to relax, as it’s patronised by men and women alike.

When our correspondents visited the premises during the week, both during the day and at night, it was an interesting sight. It was later gathered that as early as 5 pm, the operators of the joint would be warming up to start their trade, thus, it’s no longer new to them.

“We are used to it, because sometimes, even before we closed from work, they would have started setting their equipment,” said a receptionist in one of the offices on the premises. “The first time I saw it, which was shortly after I joined the company I work for, I found it very strange. Initially, I felt a church had booked the premises for a crusade that evening. So, I didn’t bother waiting. It was a Monday.

“But it happened again the following day and I had to ask one of my colleagues what was happening. That was when I was told that the place is used as a bar at night. As early as 8 pm, the place is getting filled. In fact, we have people who work in this compound who wait to drink. But, before the next morning, everything would have been cleared and nothing would suggest to you that something like that happened.

A member of staff of another company located on the premises said the bar operating at night had never posed any challenge to them, given that they would have closed before they start operation, and they would have packed their equipment and tools of trade before offices open for business the next morning.

“If you see the crowd, it tells you that people like to have fun and for it to have been sustained this long means that there is a market for it,” the staff member said.

Findings also showed that it’s double gain for the landlord of such premises, as the operators of the bar also pay rent to the landlord.

Once the bar opens, out of nowhere, young boys show up and become parking attendants, giving promises of taking care of your car for whatever widows’ mite the patron could give them. Those with exotic cars opt to park in the bank and this gives bank security guards on duty reason to have something in their pockets. Before long, the roadsides become a car park of some sort.

Anu, a staff member of the pub who had been working with them since last year told Saturday Punch that once it is about 5pm, they are expected to go behind the office complex to bring out the equipment and by 6 pm, the party starts. She noted that they worked till about 6am and ensure that they leave the premises sparkling clean so that it would be ready for business.

The young lady said that their peak period starts from Friday. “Although this place looks filled up, you should see how crowded it is on Fridays; that is when most of our patrons come to have fun,” Anu said.

One of James’ friends, Olu who actually invited him to the bar, while talking with our correspondents, noted that the main reason he loved visiting the pub was simply because just across the street, there were food vendors who sold hot delicious meal with a side attraction from acrobats and praise singers.

“As a bachelor, I am used to going home at night but I always come here first. Once I am done with my drink, I just cross the road and eat at one of the food vendors there. Their food is very delicious. All I do when I get home is just to sleep.”

While the conversation was still ongoing, James left the table to join two girls who enjoyed a cold bottle of beer apparently lost in their chit-chat. No sooner had he left did he return wearing a frown on his face.

After many inquiries, he opened up on the conversation he had with the ladies, “Imagine! I went there thinking I could make friends with them and the next thing one of the girls told me is how much I was willing to pay for the night,” he said while his friends laughed at him.

Olu then chipped in saying, “Don’t you know that most girls that come here to sit alone are ‘runs girls,’ looking for their next ‘maga.’ Besides, it is obvious to the ladies that you are an Island boy.”

It was later discovered that the ladies were commercial sex workers. While chatting with one of them who simply identified herself as Ada, she stated that she could not imagine herself standing on the roadside at night all in the name of looking for a customer. The young lady who claimed to be a student said, “Bros, I come here anytime we are on break or strike to earn a living. I cannot stand on the street like a roadside prostitute because it is not only demeaning but also risky.

“My friends and I chose this spot especially because some white men who work in the office building wait behind to drink with their friends and they are very generous. Not only would they buy us drinks, they also give us good money after we have serviced them.”

True to Olu’s word, a few metres adjacent the bar is a road filled with food vendors who display food pleasing to the eyes, nose and mouth. The tables are symmetrically arranged at the side of the road to enable cars to pass. However, what makes the food joint interesting are the side attractions from musicians and acrobats. In return, they expect the patrons to tip them for the skills displayed.

When Saturday Punch visited the food joint, a particular old man playing the guitar caught the attention of one of our reporters probably because he bore a similar appearance to Majek Fashek.

During a chat with the old man, he revealed that his name is Harry Martins and that he is 60 years old. Martins said, “I have been performing as a musician for about 17 years and I hit rock bottom when my house got burnt in 2008. I was left with nothing and after struggling again to bounce back, I decided to buy an acoustic guitar to entertain people here. I have been here since 2013. The highest amount I have made here is N60,000 and it was given to me by a man who enjoyed the way I played for him in 2014. I resume here around 9 pm and I leave whenever I feel I have made enough money. On a good day, I can make as much as N10,000 depending on the number of patrons that come to eat but when business is slow, I go home with about N500.”

Interestingly, there are other such office-turned-joints around Lagos even though it is more popular along Awolowo Way. At Oba Akran Avenue, Ikeja, the story is the same; at the close of work, a number of administrative buildings become drinking joints.