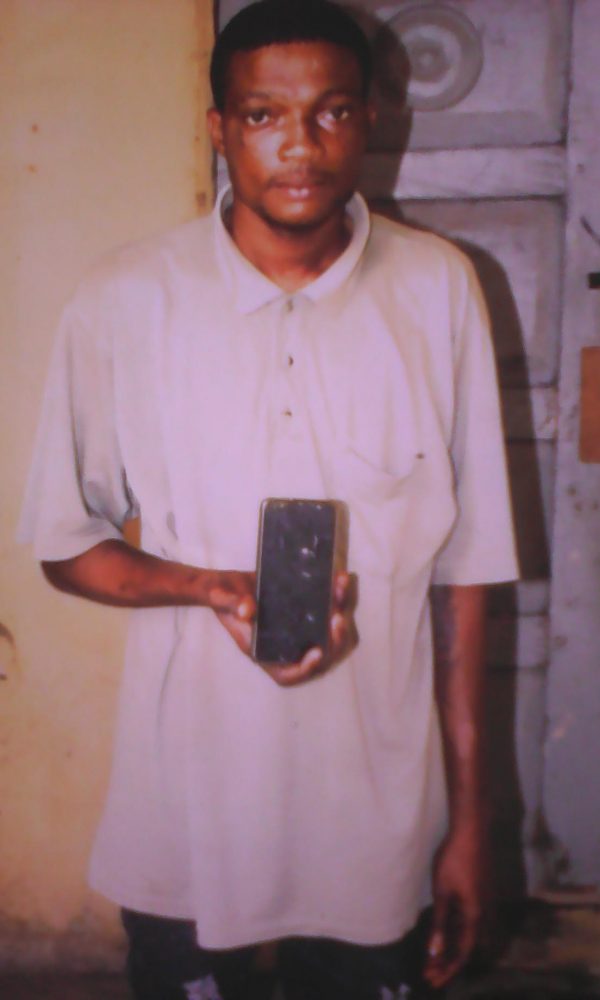 Operatives of the Federal Special Anti-Robbery Squad, FSARS at Adeniji Adele, Lagos Island, Lagos have arrested a 26-year old Akeem Fabiyi for allegedly conniving with others at large to rob a Lawyer, Mr. Segun Onikoyi of his Tecno Camon phone valued at N95,000 inside a moving tricycle while armed with gun and escaped.

A report by PM Express revealed that trouble started for the arrested suspect, a resident of Mushin, Lagos, when the complainant reported to the Deputy Commissioner of Police, DCP in charge of FSARS, Mr. Ibrahim Kaoje that he boarded a tricycle with two passengers and the rider at Palm Avenue, Mushin on the day of the incident and that on approaching Olorunsogo Bus Stop in Mushin, one of the passengers suddenly brought out a pistol and pointed it at his head and ordered him to surrender his Tecno Camon phone valued at N95,000 to them or else they would shoot him to death.

The complainant said the robbers successfully robbed him of his phone and pushed him out from their tricycle and escaped.

The source said that following the report, DCP Kaoje directed a team led by CSP Danladi Daura to fish out the suspects and recover the stolen phone.

The operatives later tracked the arrested suspect to his apartment at Olorunsogo, Mushin and arrested him with the stolen phone.

During investigation, according to the Police source, Fabiyi allegedly denied robbing anybody with the phone but that he found the phone on the ground at the Bus Stop in Olorunsogo, Mushin, Lagos.

After investigation, Fabiyi was charged before an Igbosere magistrate Court, Lagos on a two count charge bordering on armed robbery.

Police prosecutor, Abraham Fadipe informed the Court in charge No F/19/2018 that the accused and others still at large robbed the complainant of his phone armed with gun on 14 February, 2018 at Olorunsogo,Mushin, Lagos and pushed him out of their tricycle.

Fadipe said the offences the accused committed were punishable under sections 6 (b) and 1 (2)(a)(b) of the robbery and firearms provisions act Cap, R11 Laws of the Federation of Nigeria, 2004

The plea of the accused was not taken and Fadipe presented an application before the Court for the remand of the accused in prison custody pending advice from the DPP’s office on the matter under sections 264(1) of the administration of the Criminal Justice law of Lagos State, 2015 because the lower Court lacks the power to hear the matter.