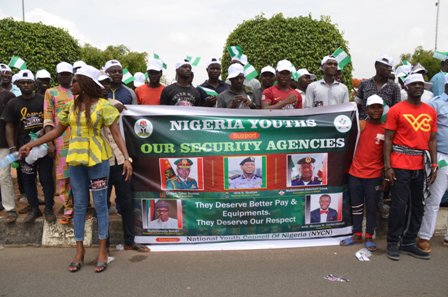 The army had come under attack after a statement by former Minister of Defence, TY Danjuma that the military is not neutral in the crises rocking many communities in Nigeria. The elder statesman said the military was colluding with those causing havoc in those communities, therefore, Nigerians should defend themselves.

This statement was quickly debunked by the army saying Nigerians should be law abiding. However, Yesterday, the army via its official twitter handle posted some photos of some young people saying they were rallying support for the Military. Nigerians on Twitter found this highly political and bashed the army for the tweet. Reactions below:

Today they rally for you, tomorrow you shoot them, day after your herdsmen will raid their village, next your BokoHaram will kidnap them. The Army had better tell these kids the truth that they are on their own

APC military wing. Shame on the Nigeria military under @MBuhari

Lol… @MBuhari Army. See how @HQNigerianArmy have been reduced to a political tool. Where is the Eagle in the Army? That is fearless, Just, Without Sentiment, Cannot be manipulated, Bold, Non Partisan. My Nigerian Army is gone

Would have been better if this don’t come on your page. It’s rude, shocking, insulting, degrading, debasing, counterproductive, to the stature and status of the Nigerian Army.
The uniform has just been muddled in the murky and dirty water of Nigerian politics.

Is the Nigerian Army now a political group?

Smh! What won’t we see under this #Change govt.

Where in lies the gallantry of the Army?

This is why they don’t want to tackle unemployment. Using our young ppl for staged rally. My faith in our military is totally destroyed! No integrity, no respect for our flag and our pledge. Shame

I sympathize with the youths of Nigeria, they are always used and dumped by the Elites.

Some tyms I just wonder! So the twenty persons or there about here now stands/represent the whole Nigeria youth or some thing right???…My heart bleeds!