See What This Brave Woman Told President Buhari During His Visit To Benue. Photos 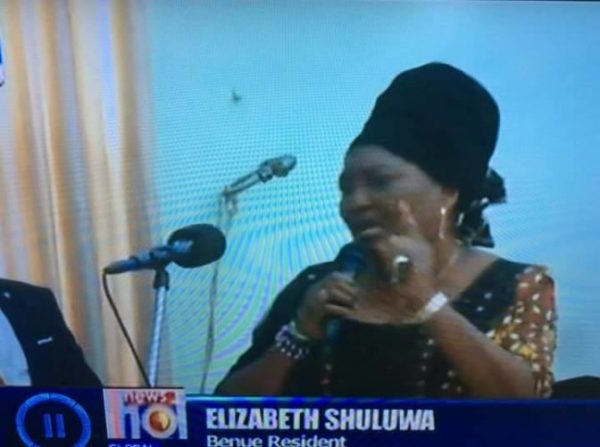 A Former Permanent Secretary in Benue state, Elizabeth-Mary Shuluwa, has go herself trending online due to what she told president Muhammdu Buhari yesterday. President Buhari was in Benue state yesterday where he met with stakeholders in the state over the series of attacks in the region..

According to mulitple online reports, the brave woman criticized President Buhari over the huge number of his security personnel as she reportedly told him to his face that the high security presence that protected him during his state visit to Benue was enough to defend the state from genocide by Fulani herdsmen.

She reportedly said she had never seen so many military officers in Benue State and that the soldiers with the president  could have stopped the bloodshed.

“Mr. President, I stand here today to talk on behalf of the women, children and the aged of Benue state. Ours is a cry Mr. President that we have cried since the eve of New Year, the black New Year in Benue state 2018. On that day Mr. President, your mothers and women and daughters and children and the aged of Benue State woke up to a horrendous news, news of maiming and killings by marauding herdsmen and they just didn’t kill the men that were like them, they killed my sisters, pregnant women, defenseless old men and Mr. President if you were not a soldier I would have said you are in that category because you are also in your seventies and we categorize them as old sir. They were among those killed, butchered, their eyes gouged out. Mr President, we cried, we wailed.

As I speak on behalf of my sisters, the women, children and the aged of Benue state, I do not have that watery substance that comes out when you cry anymore because we have cried. For two and a half months, we have been crying. No day goes by without you hearing that they are bringing dead people from Logo, from Guma, from Okpokwu, from Kwande, from Katsina Ala, from the outskirt of Makurdi Local Government and the list continues sir and we are the ones who cry. We have shouted, we have wailed but of course now we dont have the watery substance to come out so that you can see our unhappiness and displeasure. 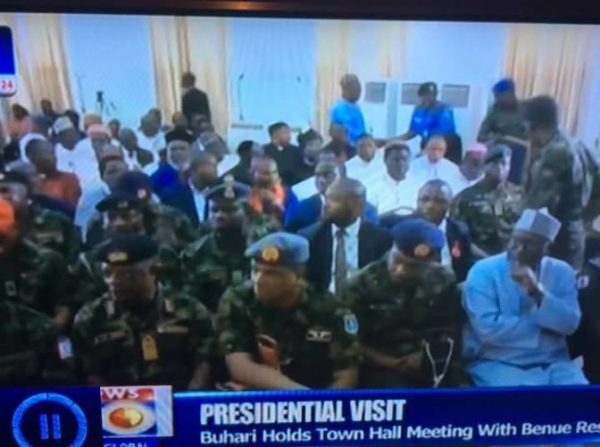 I know that you were a military man now you are our father in a civilian arrangement. I hear that military personnel even in war, by their terms of engagement, they dont kill women, they dont kill children and definitely they dont kill defenseless old people.

Thank you sir for coming, like Mary said to Jesus when he came to their home at the death of her brother Lazarus, she said my Lord, if you were here, my brother would not have died. I know that Mr. President you are the father of Nigeria, you are the father of all Nigerian citizens. Today that you are here, I will say to you directly sir that if you were here this genocide that has taken place in Benue state on New Year day wouldn’t have occurred. 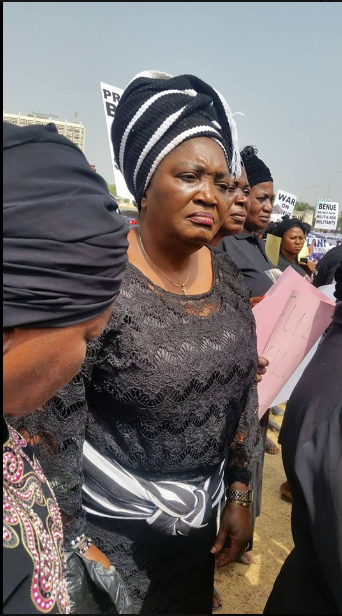 Lastly, I want to just tell you one more thing that made me cry this morning as I was coming to the Peoples House. I saw scores of soldiers, policemen, civil defence personnel and other paramilitary agencies standing all over Makurdi and I said to myself if these people as they are today were in Guma, in Okpokwu, in Agatu, in Kwande, in Logo, in Katsina Ala and in other places, would the genocide have taken place? It wouldn’t have taken place.

On behalf of the women, mothers and children of Benue state, the seeming silence and insensitivity made us to cry more and more. I know that we may not cry anymore now that you are here Mr President. 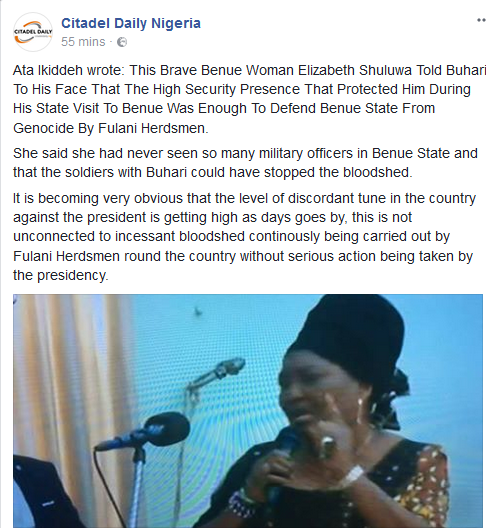