Home News Feed Shocker: Meet The Man Who Has Been Declared Dead Even Though He...
Facebook
Twitter
WhatsApp 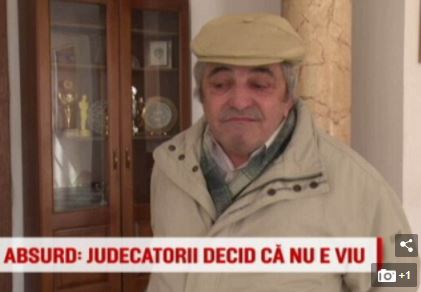 It has been reported that a Romanian man who is very much alive has been told he will remain ‘dead’, after he took too long to appeal a wrongful death certificate.

According to Dail Mail UK, Constantin Reliu, 63, was declared dead by his wife in 2016, after he moved to Turkey and went off the grid for nearly 25 years.

Mr Reliu has today lost his case in the northeast city of Vasului because he took too long to appeal his death certificate.

Romanian media reports that Mr Reliu  moved to Turkey in 1992 for work and lost contact with his wife and family.

Hearing no news from her husband, his wife managed to get a death certificate for him in 2016.

Mr Reliu meanwhile, was alive and well in Turkey and had no idea he had been declared dead until earlier this year.

Turkish authorities  discovered that Mr Reliu’s documents had expired and deported him.

When he arrived in Romania, he discovered he had been declared dead.

‘I am officially dead, although I’m alive, I have no income and because I am listed dead, I can’t do anything,’ he told reporters outside court today.