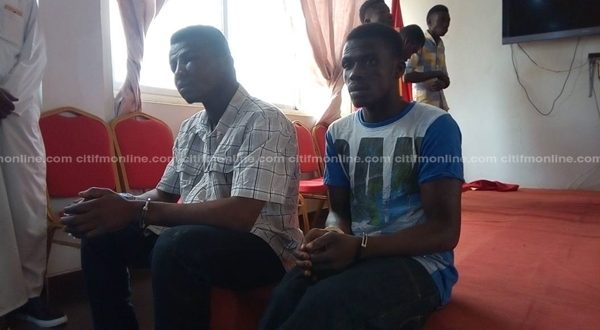 The two men who allegedly beheaded the boy

The mother of the five-year-old boy who was beheaded at Sokoban in Kumasi area of Ghana has appealed to the Inspector General of Police (IGP) and the Attorney General Department to punish the perpetrators in equal measure.

30-year-old Janet Salifu believes this is the only remedy that will lessen her pain and give her some respite.

Two suspects are currently in police custody for their involvement in the beheading of the five-year-old.

Relatives and neighbours sat close to Janet Salifu and with their hands supporting their jaws, they consoled and sympathized with a mother in deep pain after the head of her five-year-old son, Silas Kunsana was found in the possession of the suspects on Wednesday.

Janet and her family live in a slum, behind the Asanteman Senior High School in Kumasi.

She moved to Kumasi with her husband from Nadowli in the Upper West Region to seek a better living.

Her plans to start a new life for herself and her family were devastated after news that her only male child, a twin, was beheaded.

In a shaky voice, she called for justice when she spoke to Citi News.

“The perpetrators should be killed the same way they killed my son. They used a knife to cut off his head and I want the same to be done to them. I am in grief and I have not even eaten for five days. If Government does not treat the perpetrators in the same manner, I will not be a happy mother. The situation might even lead to my death,” she lamented.

Janet called on the police service to expedite processes to release the beheaded body for burial.

She also appealed to the Member of Parliament (MP) for the Suame Constituency and Government to help her financially to lessen the burden on her.

Her first two daughters, who are also twins, are in Senior High School (SHS).

Saguster and Sagut Dakorah could not hold their grief either and also called for justice.

Head of the family, Doodah Babakparanaa also appealed for financial support from Government and other benevolent bodies for the burial of the five-year-old and for the necessary rites to be performed.

“Even if the body is released to us for burial, it is going to be difficult for us financially. So we are calling on Government to assist us”, he appealed.

Police in the Ashanti region have begun questioning a spiritualist, Sheik Mohammed Maheey after he alerted police of the act, leading to the arrest of the suspects.

The suspects approached the spiritualist to buy the human head.

The spiritualist accepted to buy the head for GHc 2,500 and secretly alerted the police.

The Police proceeded to the residence of the spiritualist at Suame Zongo and arrested the suspects with the fresh head, which was concealed in a black polythene bag.

Ashanti Regional Police Commander, COP Ken Yeboah said is investigating the role of the spiritualist in the mater.

Silas was picked by the suspects at a game center in the area when he went to play.

Residents in the area want the game center to be closed down.

Share
Facebook
Twitter
WhatsApp
Previous articleThe Sad Story Of Legendary Comedian Who Died Just 2 Days After Marrying His Partner Of 40 Years (Photos)
Next articleSee The Amazing Thing That Happened To A Keke Rider After He Returned N400,000 In Akwa Ibom State (Photos)
- Advertisement -