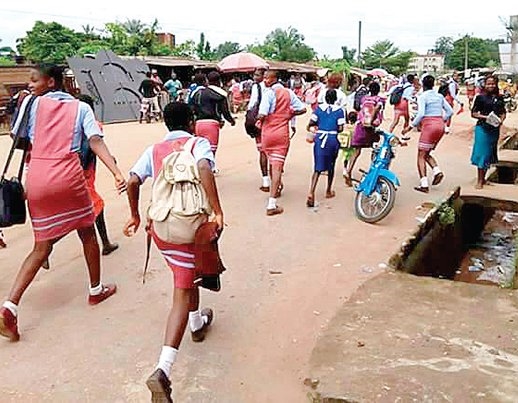 Saint Peter’s Secondary School in Akure, the Ondo state capital, were on Thursday, invaded my armed robbers who carted away N3million.

According to Vanguard, eyewitness revealed that the gunmen on getting to the school, headed straight to the office of the bursar and robbed him of the money belonging to the school.

It was gathered that the bursar was said to have been traced from one of the new generation banks in the state capital, where he went easier to withdraw the said amount

Reports had it that the incident caused a stir as teachers and students who noticed the strange faces fled in different directions. The atmosphere became rowdy and it resulted into pandemonium in the school.

The state police Command was informed by some teachers who escaped from the scene, but before the arrival of police detectives, the robbers had escaped with the money.

When contacted, the state police spokesman, Femi Joseph confirmed the robbery incident, blamed the school bursar for going to the bank to withdraw such a huge amount of money without police escort.

He pointed out that “the bursar has been arrested and helping the police with investigation.

“The was no robbery on the school, the robbers only traced the bursar and disposed him of the money.

“What we learnt was that the hoodlums traced him to the school after he had gone to withdraw a large sum of money without police protection. The money should be close to N3 million.

“He is with us, he is helping us with investigation. We will quiz him to know whether he knows more than he claims.”

Uneasy calm, still pervade the school as parents of students in the boarding house rushed to have a glimpse of what happened at the school.

Some of the parents who spoken with called for adequate security in schools across the state.