Popular English actress, Nadia Sawalha recently drank her own urine live on today’s episode of Loose Women, a popular English TV show,  it has been revealed.

The atress who is also a TV presenter drank her wee on the show to demonstrate urine therapy which involves drinking your own urine and massaging one’s skin for cosmetic or medicinal reasons.

Nadia said she would only drink her urine if the loose Women producer did it first.

She said: “We do get asked to do a lot of things by our producers and so I said I’d do it if Ashely does and he said he would…he never imagined I’d make him do it.”

Ashley then came on screen and drank his wee to the screams of the audience before Nadia followed suit.

Her fellow panellists were disgusted as she grabbed her body fluids and knocked it back.

After drinking it back, Nadia scrunched up her face at the taste. 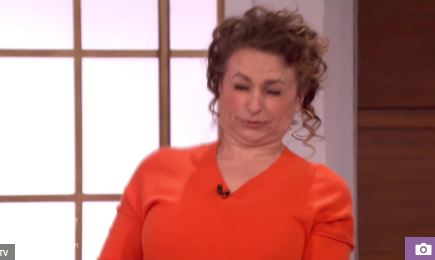 Nadia grimaced as she knocked it back

There was a little left in the jar and she jokingly told Denise to “put her finger in it”.

Andrea said; “Put a lid on it, you can’t ask someone to put their finger in your wee.”

Afterwards, they showed a clip of Nadia’s best pal Kaye Adams who also took on the challenge.

Standing out in the snow, Kaye showed the camera a shot glass of her wee before knocking it back.

However, the panellists weren’t convinced it was wee and some said it looked like water.

Andrea said: “We’re going to have to ring her and see?”

Kaye later phoned in and promised it was real.

Gemma Collins was a guest on the show later on and said she wouldn’t be taking on the challenge.

She said: “I think if it’s come out of you, why would you want to put it back in?”