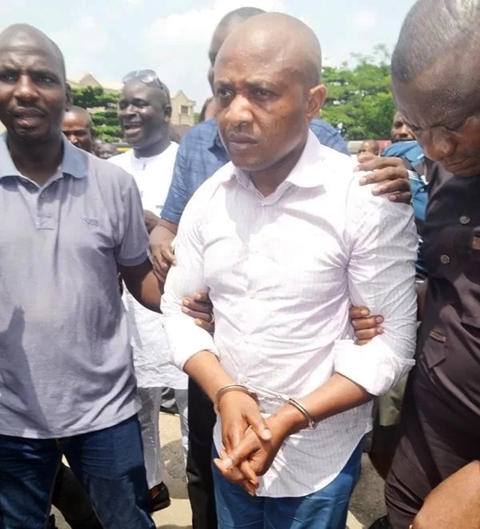 Evans after arrest by security operatives

In a statement signed by the spokesperson of the Police Service Commission, Ikechukwu Ani, a year after Evans the kidnapper was arrested in Lagos alongside over 20 suspected members of his gang, the commission have, the officers who arrested the notorious kidnapper have all been promoted.

Read the statement in full below;

PSC APPROVES SPECIAL PROMOTION OF 45 POLICE OFFICERS FOR GALANTRY IN THE ARREST OF WANTED KIDNAPPER, ËVANS”AND HIS GANG

The Police Service Commission has approved special promotion of forty five police officers and acting appointments for another 13 officers who played major roles in the arrest of Chukwudumuje Onuoamadike, aka Evans, a notorious kidnapper and 21 Members of his gang.

The Commission took the decision today, Thursday, April 19th, 2018, at its 27th Plenary Meeting which began in Abuja on Tuesday, April 17th, 2018 and presided over by the Chairman of the Commission, Sir Dr. Mike Mbama Okiro, a retired Inspector General of Police.

The promotion and acting appointments were based on the superlative performance of the officers in the arrest of the deadly gang who terrorized Nigerians. The officers are of the Intelligence Response Team, (IRT), Special Tactical Squad (STS) and Technical Intelligence Unit under the direct supervision and coordination of the IGP Monitoring Unit at the Force Headquarters Abuja.

The promotion and acting appointments were also necessitated by the need to match rank with schedules of duty either being performed or to be performed by the officers and for their acts of gallantry and courage exhibited in the course of duty.

The Forty five officers promoted included DCP Habu A. Sani, the Head of the IGP Monitoring Unit, who however, has been directed to appear before the Commission tomorrow, Friday, April 20th 2018 for an interactive session in line with the Commission’s policy for officers transiting to the rank of Commissioner.

The acting appointments were approved for officers who were not due for promotion.