Advice column; I caught my girlfriend with her H.O.D 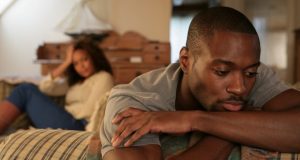 I had just finished my final year project so I decided to travel down to my girl friend’s school to spend  time with her before heading finally to Lagos which is my base. I called her to inform her and she was happy about it so I headed for her school the following day.

I got to her school on Sunday then on Monday, she was supposed to go for  a class at 8 o clock but I was surprised when she called her H.O.D who was supposed to take her the course to find out if the class would be holding  then I asked her what kind of relationship exists between them that would warrant her to call him to find out if he would be holding the class or not. She however said ”the man is jut like a father to me” and I had no reason to doubt her because I had never caught her with any man before.

However, 2 weeks after I got to her school, she commenced her exams and it was the H.O.D’s paper then I saw a copy of the exam question paper with her the night before the exams then I knew within me that there was more to their relationship. I again fulfilled all righteousness by asking her why the man would give her the question paper then she again said the man was just helping her.

I decided to play along and pretended as if all was cool. Then she came back from school one day and said my presence was not letting her read well for the exams even when she had just 2 papers left

I took my bag the following morning and pretended to be heading to Lagos but veered off at a friend’s place. I then narrated everything to my friend and told him the name of the H.O.D and he promised to help me get the residence of H.O.D. We located his house address and  positioned around there and I saw my girl friend alighting from bike and heading into the H.O.D’s apartment.

I  called her on the phone around evening since I was supposed to be in Lagos already and we got talking then I asked her where she was and she said she was at home reading for  exams. I  told her to stop lying that I saw her entering the H.O.D’s  house and told her the colour of the cloth she whore to the place after she tried denying then she hung up on me then after several calls her pone became switched off.

I later saw her the following day and she owned up to having an affair with the man but said she was under duress and that the man threatened her wit carry over.

She has been begging me for forgiveness and I really love her so much and do not know what to do as she has taken her last paper and might not have anything to do with the H.O.D again.