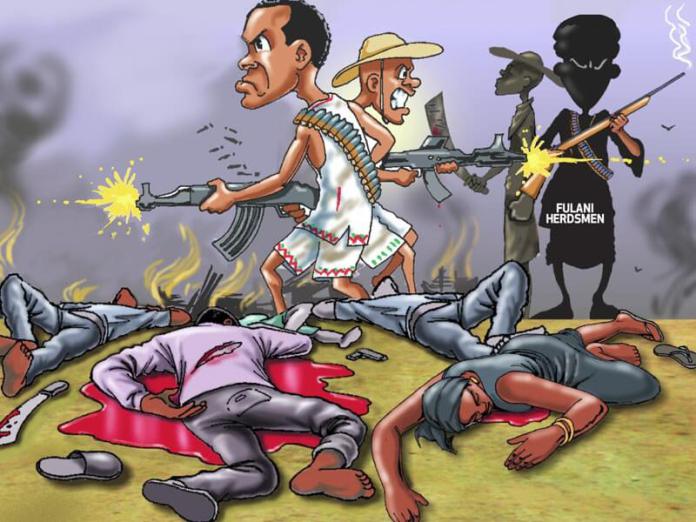 An early hour attack on Agasha community in Guma Local Government Area of Benue State by suspected Fulani herdsmen thursday has led to the alleged killing of 10 residents of Agasha town.

This is even as Naka town in Gwer West Local Government Area was razed down by angry soldiers who were protesting the killing of one of them by youths of the area.

According to a local source, the herdsmen invaded the town from the neighbouring Nasarawa State and opened fire on the unsuspecting residents.

He said 10 people were killed while several others sustained injuries.

In Naka, the capital of Gwer West Local Government Area of the state, men of the Nigerian army deployed to the area went on rampage, arresting and burning down several commercial and residential houses following the killing of a soldier by unknown men.

The soldier, Private Danlami Gambo, was said to be missing for some days from his duty post, but was later discovered dead and was buried in a shallow grave.

It was alleged that the soldier was mistaken for a herdsman among those terrorising the area and killing several persons last week.
But according to the Assistant Director of Military Public Relations, Major O. Ayeni, on April 18, 2018, at about 3.30p.m., troops of 707 Brigade deployed to Naka in Gwer council area observed the absence of Gambo from his duty post

“The soldiers rifle was however found at the location. It was gathered that the soldier was last seen receiving a phone call but left in search of network and did not return, troops immediately conducted search at about 6.10p.m. and observed blood stains along a footpath leading to a newly dug grave and the soldiers body was found there.

The military director said the body of the soldier was butchered and had been deposited at the air force mortuary in Makurdi.
He said investigation revealed that some locals were involved in the killing which had led to the arrest of some suspects by a team of soldiers dispatched from the unit to the scene of the incident.

Ayeni said investigation are ongoing to unravel what led to the death of the soldier.

Meanwhile, the Taraba State Governor, Dairus Ishaku, has raised the alarm over what he described as rising military brutality and molestation against the peace-loving people of the state.

He said the military has taken over the job of the police and is bombarding people’s houses and arresting youths and locking them up.
The governor who addressed a press conference yesterday at the headquarters of the Peoples Democratic Party (PDP) in Abuja shortly after its national executive meeting, said the military has engaged in rampant arrests of youths and transferring them to Abuja without regard to his office as the chief executive and chief security officer of the state.

Ishaku further alleged that the military is not protecting the people against the killer herdsmen but now going around arresting the youths in the town.

He said though military has withdrawn from the southern part of Taraba State, they are still being harassed by the herdsmen militia.
The governor said it was this flagrant abuse by the military that led to the demonstration by the women last week, adding that the situation is getting worse.

“The military has taken over the job of the police and bombarding people’s houses at 2a.m., arresting youths and locking them up. Two of these youths were missing and we understand that they are with the military and being transferred to the Abuja military headquarters.
“I asked for the reason. Nobody has confronted me with the reason. All I was told was that they committed crime. Which crime nobody has told me about as the chief executive and chief security officer of the state,” he said.

The governor also accuse the army of taken over the responsibility of the Police and detaining youths without trial.

“Nobody has reported this to me. The police are not aware of this. The military has written to the Takum Local Government Area Chairman for him to report to them immediately to be arrested.

“I don’t know what is happening. The armed forces are not protecting the people against the killer herdsmen but now going around arresting the youths in the town.

“This is what led to the demonstration of the women last week. Now the situation is getting really bad.

“I am now calling on the federal governmen to call on the military to bring back those boys that were arrested and allow the police to do their job if indeed, they are criminals and to insist that the military do what they are asked to do and that is to defend us; they shouldn’t allow us to be vulnerable,” he said.