Nigerian cross-dresser, Bobrisky has been captured in a video having a heated argument with some women in a commercial bank somewhere in Lagos.

The effeminate was in the bank to make some transactions when a non-fan spotted him dressed in a lady’s clothing.

It’s reported that the woman confronted him and berated him for dressing in a way she deemed abnormal.

A customer at the bank made the video and it seemed as though it’s the first time the transvestite would be confronted in public for his choice of dressing.

As soon as the lady attacked him, some other women joined in the argument and also condemned the self-acclaimed SnapChat Queen for dressing like a woman in public. 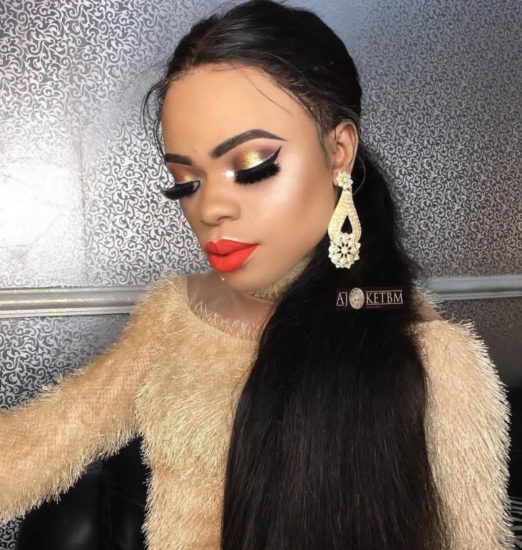 Bobrisky is said to have returned the lashes and at a point, even threatened to beat up the woman and asked her if she does not have any kind of home training that she would openly involve herself in other people’s matters.

According to eyewitnesses, Bobrisky stated that he would tear her wig and wait for the police to come take them in handcuffs.

The men at the bank could be seen clearly in the video and not unnerved about the ongoing argument.

Though it was gathered that the cross-dresser got support from other women in the bank, who believed that the attacker should have minded her business and leave the guy alone.

Bobrisky could be seen raining more insults on the woman even as she left the bank.

“It was quite surprising that Bobrisky appeared in public fully dressed in a female attire. And just as it always is, Nigerians would surely react to the abnormal dressing. He should have expected that anyway. But at least the woman should face her own business too” a commentator said

Share
Facebook
Twitter
WhatsApp
Previous articleVan Vicker shares photos of his family, shows off his kids
Next articleNigerian lady bounced from Club Quilox because she doesn’t use an iPhone
- Advertisement -

Grammy-nominated singer and entertainer, Lizzo has shared some pictures for a Rolling Stone cover on her Instagram. The singer who has had a notable amount...
Read more

‘I Am More Marlian Than I Thought’ – Singer Peruzzi

Popular Nigerian singer, Peruzzi, has once again confirmed his Marlian status, stating that he is more Marlian than he thought. The music entertainer made this...
Read more

Popular Nollywood actress, Moyo Lawal has poured out her heart on her marital status. The actress who shared a video showing her amazing curves hinted that...
Read more
- Advertisement -