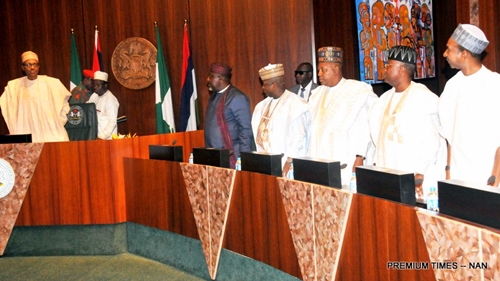 TORI News had reported earlier today that President Muhammadu Buhari was currently meeting with governors elected under the platform of the governing All Progressives Congress (APC).

The meeting was about the tenure of the party’s national working committee (NWC) led by John Oyegun.

According to TheCable, the highprofile meeting which was held inside the Council chamber of the Presidential Villa, Abuja, at about 2:15pm on Tuesday, ended in deadlock.

Recall that during the last national executive committee (NEC) meeting of the party, Buhari said he was against the extension of the NWC period in office by a year.

As a means to prevent a fresh crisis, some stakeholders had reportedly proposed a caretaker committee to be led by Adams Oshiomhole, a former governor of Edo.

Oshiomhole and Oyegun are from the same state.

On Tuesday, all the governors elected on the platform of the APC met with Buhari to iron out the issue.