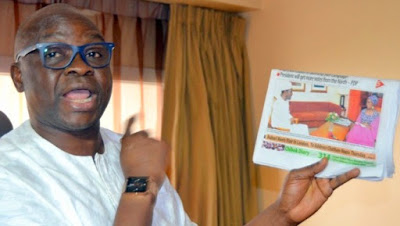 Ekiti State governor, Ayodele Fayose has said President Buhari’s declaration for 2019 is nothing but a slap on Nigerians and if the President does not know the way out, Nigerians in 2019 will show him the way. Fayose said this while speaking with journalists today after the President’s declaration.

“That ambition is dead on arrival. We don’t want grandpa as president anymore,” said Mr Fayose.

“Nigeria does not deserve a Buhari as president in 2019. Buhari is old and tired. When people don’t know when to take their leave and say bye, Nigerians will show them the exit door

“He has done more harm to this country. His ambition is a means by which Nigerians will tell him good riddance to bad rubbish when they boot him out of office. He is an easy candidate to defeat in the poll for he has failed woefully.

“He has failed in all fronts. He has failed in his so-called fight against corruption; he has failed in the economic front. He has not done well in terms of security. People are being killed in large number daily and Nigerians have no confidence in him.

“His declaration today is a slap on Nigerians in the face of what Nigerians are passing through. His government is not only clueless, but in a shambles. He should go home and rest.”