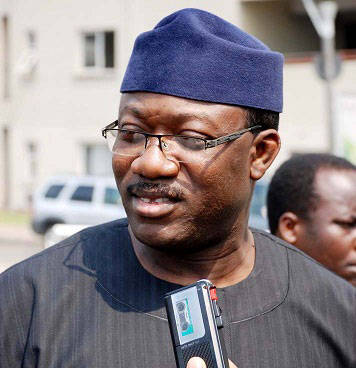 Dr. Kayode Fayemi, Minister of Mines and Steel Development, on Sunday declared that he will contest to return as governor in the Ekiti State gubernatorial election scheduled for July 2018.

Fayemi,  who said he would visit the state secretariat of his party to officially declare his ambition anytime from April 14,  added that the official declaration would come after the Independent National Electoral Commission (INEC), lifts the ban on open campaign ahead of the poll.

Fayemi, who was governor of Ekiti State between October 2010 and October 2014, spoke to journalists about his intent at a briefing at his Isan-Ekiti country home on Sunday.

He said everything constitutionally, legally and legitimately possible would be done to ensure victory for the All Progressives Congress at the forthcoming governorship poll.

Fayemi said: “Do you need a rocket scientist to tell you that I am running? I was very clear that I am a process person, I am not going to jump the gun because there are rules and guidelines for electioneering.

“The body that is responsible for that has stated the obvious when you can actually start campaign. The fact that people are actually flouting the guidelines is a fault of INEC and INEC is not taking them up on it.

“That is my own attitude to it and at the appropriate time, I will tell my party because this is purely a party matter, it is not a public matter yet.

“So, I don’t really understand the level of curiosity whether I am running or I am not running. I am very clear that what we have in this state today is not what this state deserves.

“I have always been very clear that whatever it takes constitutionally, legally and legitimately to put our party in office in October 2018, we will do as a party.

“I have also gone ahead to say this meeting (held on Saturday) is our usual gathering; it is not a place to declare the intention to run but as to whether I am running or not, I am running.

“That is not debatable but I am a process person, I am not going to flout the law. You will know, you will all be invited when I decide to formally declare within the ambit of the guideline issued by INEC.”

However, Fayemi did not declare his intention when he hosted party leaders from ward to state levels to a quarterly meeting on Saturday, contrary to widespread speculations.

He had said at the meeting: “INEC has just released election notice, they said public campaign begins in Ekiti State on April 14. Let’s wait till then, whether we are sure of ourselves or not, we will know.”

But he said at the meeting that he had learnt his lessons following the loss of power to Governor Ayo Fayose in the 2014 governorship election while calling on party faithful who he had offended to forgive him.

Fayemi said Fayose cannot threaten him with any White Paper saying he has a Red Card to show Fayose at the election. He urged APC members to hold their Red Card in one hand and their Permanent Voter Card on the other hand.

The ex-governor, however, appealed supporters of governorship aspirants to stop running down others on the social media urging them to market their principals.

He added that election is not won on social media platforms,  but at the polling units.