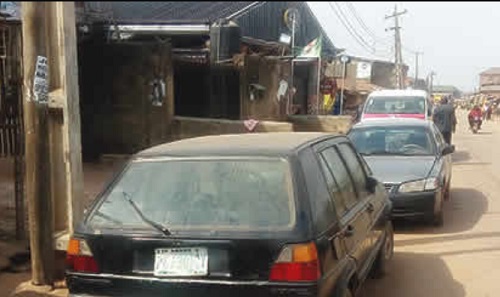 Scene of the incident

An Abuja-based computer engineer Oladeji Hamzat, who allegedly stabbed his childhood friend identified simply as Bayo, to death following an altercation that reportedly ensued between them at a bar, has been apprehended by operatives of Nigerian Police in Ogun State.

According to PUNCH Metro, the friends and others were celebrating with a friend, identified only as Owoseni, who was marking his birthday at a bar, Hummes, in Agbado, Ifo Local Government Area of the state around 10pm on Friday.

It was gathered that Hamzat arrived late at the event and greeted friends he met at the bar one after another, and after some minutes, Bayo was said to have confronted him for not according him the regard he gave other friends.

In the ensuing fight, Hamzat allegedly stabbed Bayo in the neck, throwing the bar into a commotion as the victim was rushed to three hospitals before he gave up the ghost at the Ifako-Ijaiye General Hospital, Lagos.

A team from the Agbado Police Division, led by the Divisional Police Officer, CSP Sunday Omonijo, responded to a distress call from the bar and arrested Hamzat.

While speaking to a correspondent, a police source said that eyewitness’ accounts showed that the violence stemmed from an argument over greetings.

“Bayo and other friends were at the bar when Hamzat arrived. He (Hamzat) greeted other friends. While the birthday celebration was on, Bayo challenged him that he shunned him when he arrived at the bar. That led to the disagreement and he stabbed Bayo with a broken bottle. Their relatives said they were childhood friends,” the source said.

A worker at the bar, Godwin Frank, said the suspect wanted to flee the facility after stabbing Bayo, but was intercepted.

He said, “I was taking wine to the barman from the store when I heard the sound of a bottle being smashed. By the time I got to the bar hall, he (Hamzat) was running away as fast as he could. One of our security men and some people intercepted him at the gate and dragged him inside.

“They (Hamzat and Bayo) were at the same table with their friends. The deceased was even the one who bought the roasted meat they ate.”

The manager of the bar, who did not disclose his name, said the victim slumped outside the bar, adding that he made efforts to save his life.

He said, “I was at the back of the bar when the incident happened. I heard people running outside and I came out. I saw the victim and the suspect running outside. Somebody said the suspect stabbed the deceased. Our security personnel tried to find out what happened. They found out that the man (Bayo) had already been stabbed. People were running helter-skelter. The victim ran to the next compound and fell there.

“The suspect wanted to escape, but our security man held him. The suspect was shouting ‘Is he dead?’ I saw the victim lying down and we took him to three hospitals, but he was rejected. We then took him to the Ifako-Ijaiye General Hospital and I deposited money for his treatment. He died there. The doctor said he had lost a lot of blood.

“I called the DPO and the suspect was arrested. We took the deceased to the station from where his corpse was deposited in a morgue. We tried all we could to save his life. The deceased’s parents said they were friends. He was stabbed outside the bar.”

But the 35-year-old suspect, who hails from Abeokuta, Ogun State, said he did not know how Bayo was stabbed, stating that the deceased approached him after he (Bayo) was allegedly drunk, asking why he (Hamzat) had not been around for a long time.

Hamzat, who claimed he could no longer remember Bayo’s face, said he shunned him and continued to have fun, adding that he was at it when the victim confronted him again.

He said, “I am a computer engineer and work in Abuja. I arrived here (Ogun State) on Thursday to visit my parents who live in Adiyan, in the Ifo LGA, and I lodged in a hotel at Agbado. On Friday, I attended Owoseni’s birthday. He (Bayo) came to where I was sitting and asked me where I had been all the while. I could not remember where I knew him.

“He came to meet me again and his friends cautioned him and said that was how he misbehaved whenever he was drunk. It was like he was looking for trouble. He confronted me again, smashed a bottle and attempted to stab me. I used my hand to block him and I started bleeding in the hand. I rushed outside with the blood. People started to beat me up. That is all I know. I do not know how he was stabbed in the neck.”

The Ogun State Police Public Relations Officer, ASP Abimbola Oyeyemi, said the case had been transferred to the Homicide Section of the State Criminal Investigation and Intelligence Department for further investigation and prosecution.

“One Chinedu reported the case at the station. We do not know what led to the fight. The suspect stabbed the victim in the neck at a bar. He was rushed to a hospital where he died. The suspect has been arrested,” he added.