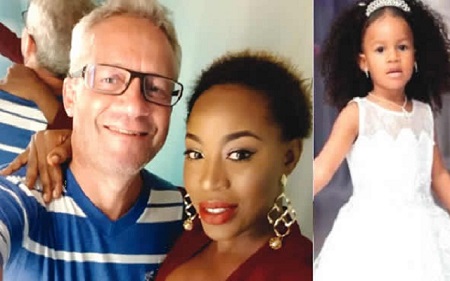 The Lagos State Government on Wednesday stated that forensic investigation has revealed overwhelming and compelling evidence to the effect that a Danish national, Peter Nielsen murdered his Nigerian wife, Zainab, and three-year-old daughter, Petra, in Banana Island area of Ikoyi on April 5, 2018.

In a statement released by the Attorney General and Commissioner for Justice, Mr. Adeniji Kazeem, said a prema facie case (evidence) of murder had already been established against the suspect contrary to Section 223 of the Criminal Law of Lagos State, 2015, adding that he would be prosecuted at the High Court of Lagos State for the crime.

“The Office of Attorney General and Commissioner for Justice on the 19th of April, 2018 issued Legal Advice to the effect that a prima facie case of murder Contrary to Section 223 of the Criminal Law of Lagos State, 2015 has been established against the suspect, Peter Nielsen (M) – a Danish National. The suspect is therefore to stand trial; before the High Court of Lagos State for the murder of his Nigerian wife and 3 year old daughter.

“There is overwhelming and compelling evidence both forensic and direct eye witness account showing without doubt that the victims were killed by the suspect. There is also evidence that there was a history of domestic violence against the victim by the suspect,” Kazeem said.

Giving background of the case, the Attorney General recalled that after news of the alleged murder broke, the police swung into action and conducted an indepth investigation, while the case file was forwarded to the Ministry of Justice for legal advice.

“On the 5th /6th April, 2018, the people of Lagos State woke up to the news that a mother and daughter – Zainab Nielsen and Petra Nielsen were allegedly murdered in their residence on Banana Island, Lagos.

“The matter was reported at the nearest Police State and the Nigeria Police immediately began an indepth investigation into the case. On the 10th of April, 2018 the Office of the Deputy Commissioner of Police, the Nigeria Police Force ‘D’ Department (CID) Panti, Yaba forwarded the duplicate case file of their investigations to the Lagos State Ministry of Justice for legal advice,” he said.

Besides, Kazeem said the trial of Nielsen would commence at the High Court as soon as the case is assigned to trial.