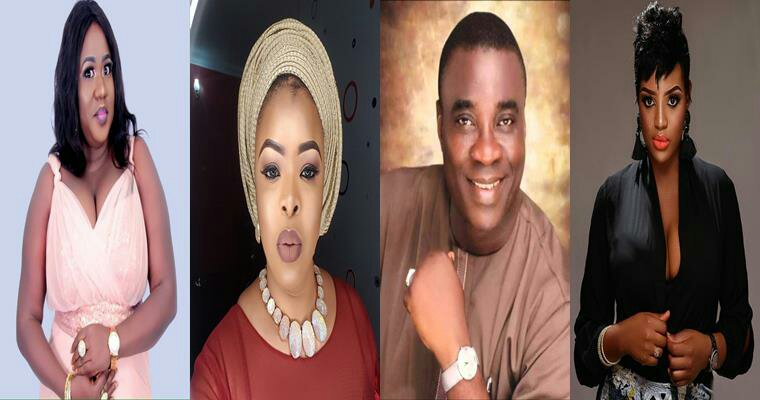 Since Fuji Maestro Ayinde Marshal aka KWAM 1 married one of his wives, Titilope, legally on his 61st birthday at a private ceremony at his Ijebu mansion, there has been trouble among female actors in the entertainment industry.

The reason for the war is not far-fetched since the 61-year-old musician, who is highly loved and respected, is a darling to some actresses who are ready to have kids for him and be called Mrs Marshall.

One of his concubines, who turned babymama is Nollywood actress, Bisola Badmus.

Bisola, who had in an interview with Encomium in 2016, revealed that the father of her son is KWAM 1. She refers to herself as K1’s wife but she is just a babymama.

According to the findings made by Kemiashefonlovehaven, Bisola and K1 had always enjoyed a high level of intimacy before she got pregnant. To authenticate the veracity of this fact, K1 had devoted a section of eulogy to her during the launching of Dayo Amusa’s movie premiere, “Dewunmi Iberu” in 2012.

It was gathered that at the height of their affair, when Bisola had difficulty in getting pregnant, K1 had suggested that she visited a good gynecologist. Later, when Bisola got pregnant, there was an ‘unwritten’ agreement between the lovers to keep mute over the paternity of the baby.

It was gathered that when Bisola was delivered of her baby, K1 was informed on the phone and he visited her at the hospital as well. Moreover, the Fuji king also dispatched a delegation, among whom was his family cleric (Alfa) to attend the naming ceremony. Those who have seen Bisola’s son swore that he shares an uncanny resemblance with his father.

“The interview caused a strain in her relationship with Alhaji, who had warned her to be discreet about their affair. Though he still takes responsibility of her son, Abdulmalik Ayinde Marshal, he is yet to make up his mind on marrying her legally,” a source exclusively told Kemiashefonlovehaven.

But then, KWAM 1 is in a sizzling romance with actress Dayo Amusa and if all odds are pushed aside, Dayo should walk down the aisle with Alhaji.

“Dayo’s hurdle is her mum who is against her daughter marrying someone like Alhaji. Though he is a responsible father, Dayo’s mum, who is also re-married to another man (not Dayo’s dad) is not comfortable with the idea. In fact, if she allows Dayo, Alhaji is set to give her the ring as we speak,” another source revealed.
Currently, Dayo, who is rated as one of Nigeria’s most brilliant actresses, holds a very special position in K1’s life and she is said to be working towards becoming a permanent fixture in his life very soon.

But not everyone knew that another Nollywood actress, Funke Adesiyan is also in the picture.
When Alhaji was 60 in 2017, she shared this:

“Still your day daddy… I remember the day we took this picture on Maddisson Avenue, New York. You gave me the suprise of my life when you called me from Battery Park that you were looking for my school to say hello to me. I thought you were joking. I sent you the address on whatsapp. Lo and Behold, Bobo was at our reception. You came to our admin office and asked for my file. You were stunned to see i paid $56,000 to educate myself. You burst crying and praying for me.

All i see on your face was Pride! You brought out a bundle of money that clearly was sprayed for you as it was filled with all denominations. You counted $5000 and gave me as your contribution towards my education. You took me to 5th avenue to shop for me and headed for the airport. I will remain stunned that you made a NY trip just to see me. You are not only a father to me, you are my friend and a friend to my parents (as they do ofofo behind me) lol. Have a blast 60 like 40.” (sic)
funke adesiyan aand kwaam1

Known to always flaunt her wealth and rich background, Funke, who once dated actor/producer Saheed Balogun, is popular on social media for her outspoken nature and her urge to always flash her big boobs.

On his 61st birthday, there was no shout-out message from her since he married Titi on that day.

“That doesn’t mean she is out of the picture. Alhaji likes her too and who knows, she might be lucky to get the ring,” our source said.

On her own part, Bisola has vowed to engage Dayo in a battle over who wins the heart of the Fuji star. Funke, though not appearing desperate, isn’t as keen.