On Sunday, the Enugu State Police Command said they had commenced investigation into allegations of gang rapes at Flavour’s concert.

The concert was held at the Michael Okpara Square, Enugu on Saturday.

The Enugu state command of the Nigeria Police Force through its operatives of the Independence layout Division have commenced a full scale investigations into the alleged conduct of some people ranging from attempt to gang rape a victim as well as other offences.

It was gathered that one person who is already helping the operatives in their investigations, have been nabbed for his alleged role in the attempt to gang rape a victim at Michael Okpara square axis yesterday during a musical concert by a popular Nigerian musician.

Also nabbed were three others in relations to alleged offences of snatching and stealing of handsets during the said event. Those arrested, will be made to face the music in line with various provisions and specifications of the law after a full scale investigations. 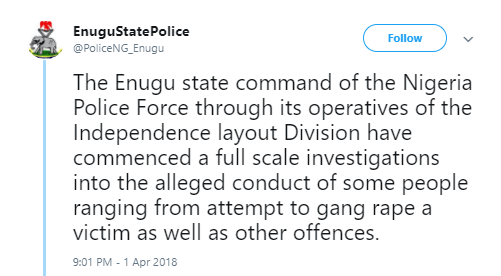 It was reported that a Twitter user, Natulize who was present at the concert, stated that over 20 ladies were raped despite the presence of policemen.

So your favourite celebrity decided to give back to the community, makes his concert free, but his fans(most) present at the square starts to rape girls like it’s part of the script!

They not only Rape girls, but go in turns, protect the rapist from security agents and then start to play with the victims undies! Please someone tell me this is Sodom$Gomorrah !

Never seen or heard of Rape being this glorified, truth is if your community is filled with toxic people, don’t live in denial, fix your problem even if it means not putting up a show, Yes please don’t, more so don’t make it worse!

Before you come here to ask what the girls wore?( which just shows your low IQ) Girls on jeans were RAPED! These boys came with X-Men claws, they ripped jeans like it was a wet piece of paper, still had the nerves to wear condoms, have an erect and rape a lady till she bled…