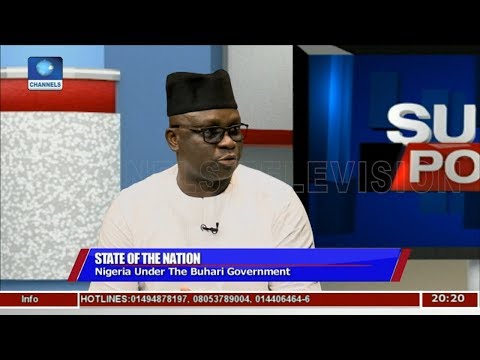 Governor Ayo Fayose of Ekiti State was a guest on Channels Television‘s Politics Today and he discussed Nigeria’s economy, the President Muhammadu Buhari-administration, the upcoming Ekiti guber election, and the recently approved $1bn for arms.

“Nigerians are grossly disappointed in Buhari”, Fayose said, adding that the “federal government is stealing from the excess crude account (ECA) which belongs to all federating units.”

Fayose said that the Ekiti State Government has charged the federal government to court on the approval of the sum for fighting insecurity.

On whether he still want to be president, Fayose said: “By the grace of God, Seun.”

Fayose, when asked if he’s afraid he’ll be in trouble when he leaves office later this year, said: “Those waiting for me, will wait in vain. I am Peter, the Rock…. I have defended Nigerians in good conscience. I have no apologies.”

“These EFCC people are persecutors, they are not prosecutors,” Fayose said.

He said that he has chosen to support his deputy Professor Kolapo Olusola to become the next governor of Ekiti State because “he’s done very well.”

Fayose said whoever wins the primaries between Olusola, Dayo Adeyeye and Senator Biodun Olujimi, he’ll support the individual, adding that it’s not a do-or-die affair.

“The only person that can dump me and I’ll care is my wife,” Fayose said.

Fayose also added that a script should be written for the president for his visit to U.S President Donald Trump, saying that he should not “go there and say Nigerian youth are lazy.”