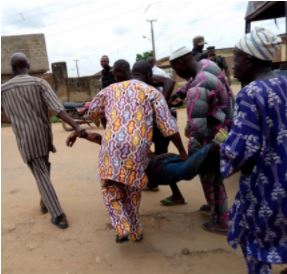 Graphic photos have shown the young man who was hacked to death by machete-wielding cultists yesterday in Ijebu-Igbo, Ijebu North Local Government Area of Ogun State.

Local reports show that the violent incident took place on Sunday evening after an argument broke out during a football match at a Primary School in Oke-Agbo, Ijebu-Igbo. Some young men were playing football on the primary school field when a number of them got into an argument which soon turned violent.

The young men fled in different directions but the victim was chased by cultists suspected to be members of Eiye Confraternity and he was hacked to death when they caught up with him.

The assailants fled the scene immediately after the attack.