Home Of Satan Found In Ekiti 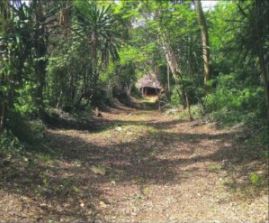 Esu is the Yoruba fashion of Satan in Christian and Jewish belief. It is generally known as the Devil across the western cultures, but in Yoruba cosmology, he is a god of mischief, created by Eledumare, Almighty God, to serve as an examiner/task master for humans.

The Yoruba worldview does not portray Esu as an evil person or spirit as the Christian or western worldview interprets it. What the god of mischief does according to the Yoruba, is to test humans, or rather tempt them in the process of making a choice between doing evil or good by playing on their weaknesses or tendencies, with a view to authenticate who actually belongs to godly ways.

Esu is also the divine agent, in the Yoruba cosmology, who has been assigned by Eledumare, to eventually punish evil or reward good as done by humans.

Ijelu-Ekiti, in Oye Local Government Area of Ekiti State, occupies a significant place in the history of Yoruba. It is believed that Esu, in the context of Yoruba god of mischief, once sojourned from Ile-Ife, cradle of Yoruba race, to some towns in Ekiti, wrestled with monarchs and defeated them until he was defeated by the Elejelu, monarch of Ijelu-Ekiti long ago.

Christened Esu Ijelu by the people of Ijelu-Ekiti, Esu was believed to have decided to settle down permanently in Ijelu-Ekiti after he was defeated in a wrestling match by the then Elejelu at the village square and before a crowd of Ijelu community. Madam Abigail Dada, 95, a custodian of traditional festivals and rituals in Ijelu-Ekiti, told Daily Sun a part of the story of Esu Ijelu:

“The coming into Ijelu of a strange but strong man, later known to us as Esu Ijelu (devil of Ijelu land) birthed the festival named after the strange man.  Esu Ijelu festival used to be a responsibility of my forbears, one of whom was late Chief Ogungbooye from Ulesi family. They are the custodians of the Esu Ijelu festival.

“Every year we celebrate and appease the Esu and use many materials to appease and offer prayers. In turn, the deity gives us blessings, children and breakthrough at work or businesses among others.”

The Elejelu of Ijelu-Ekiti, Oba Adetoyinbo Ajayi, said Esu Ijelu was a powerful man and quite strange being who migrated from Ile-life and came to Ekiti in his quest to wrestle with as many traditional monarchs as possible. He defeated a number of monarchs of that time including the Oloye of Oye-Ekiti,  Onitaaji of Itaaji-Ekiti and Elekole of  Ikole-Ekiti:

“Any monarch he wrestled with and defeated, died and he moved on to another town in Ekiti land to wrestle with yet another monarch, until he got to Elejelu of Ijelu who, through the help of some rituals of appeasement to Ifa, defeated him. This made Esu Ijelu to eventually make Ijelu his home.

“As soon as he was floored on the wrestling spot, he vowed to remain in the town not as human but as a deity, and disappeared into our earth at the spot. He reappeared behind the king’s palace and that spot has become his shrine till date. It has since been called Odo Oro, meaning home of the deity.”

Recanting Esu Ijelu’s words shortly after his defeat and before he joined the ancestors as a deity, the monarch said in Yoruba: “Eleju o daa mi. Lati eni lo, Ijelu ni ma ma gbe o. Masi ma ran yin lowo.” Meaning: “Elejelu, you have defeated me. From today, I will remain here and help your people at all times.” He added: “While he was saying this, he was shedding blood from one of his eyes and tears from the other of eye.

“Ijelu, though was a town of very powerful warriors, armed with very potent charms, but was ravaged by constant wars. Esu Ijelu, once made a deity, used his powers to assist our men in war fronts and reduced the number of times the wars sacked our town to 13.

“During the time our town was sacked, many of our people migrated to other towns in Yoruba land and the North. This is why you have them in Oke Aremo in Ibadan, Ikun, Orin Ido in Ido-Ekiti, Abeokuta and Ikorodu, Ilofa in Kwara State, Aramoko-Ekiti and other places.

“Esu Ijelu deity assisted many Ijelu indigenes who joined the army and fought during the civil war such that none of our children died in the war front.”

The Obaloro, spokesman of the deity, Olaseinde Ogunniyi, whose duty it is to receive visitors and devotees of Esu Ijelu during the deity’s 100-year annual festival, said: “I am the current Obaloro of Esu Ijelu deity. I have my office at the shrine of Esu Ijelu. It is behind the Oba’s Palace. My emergence as the Obaloro was divine through a spiritual means. I belong to the Atiba family and our family, with the Iloka family and Ulesi are the families that the gods choose to become the custodian of the Esu Ijelu deity.

“Esu Ijelu brings prosperity and breakthrough but he also brings damnation and poverty.  I didn’t want to become the Obaloro but after several years of struggling and failing to succeed where my colleagues are succeeding, I heeded to the call to become Obaloro and since then, I have been having breakthrough in my work as a driver.

“In those days, Esu Ijelu used to be appeased with a human being who used to be his carrier. No one goes after the carrier or forces anyone to become the victim. It is the spirit of the god itself that brings the carrier on the day of the appeasement. He would simply walk into the shrine for the appeasement rituals. In most cases, such people are strangers and may also be a man from the town.

“Today, Esu Ijelu is appeased with a cow, hot drink, kolanuts, white clothes, snail, salt and bitter kola among others. Prayers are also made with the foregoing items in his shrine.

“Men don’t wear any clothing except a white wrapper during the festival for appeasing Esu Ijelu. Our women also expose an arm in dressing up for the festival. Failure to do this attracts very severe punishment from the deity itself.

“We the Obaloros are chosen through spiritual means. What happens is that once an old, tired Obaloro dies, he is buried underneath the shrine of Esu Ijelu. Seven days after his burial, the one chosen by the gods to succeed him, who would be a seed from any of the families earlier mentioned, would on his own come to the burial site by any means and from anywhere he is in the world. That way, the people would recognise him as the next Obaloro.

“In my own case, I was chosen in a different way. The last Obaloro who died about 11 years ago brought a disruption to the succession process because his children did not allow the town to bury him according to our custom. They have embraced the new religion.

“Myth has it that Ile-Ife, the cradle of the Yoruba race, was where Esu Ijelu was born. He stood up and walked on the day he was born and went to kill his father whose sin was failure to take care of his mother after impregnating her. It was this killing of his father that eventually drove him away from Ile-lfe, from where he embarked on a journey of wrestling conquests against some Ekiti monarchs.”

Elejelu disclosed that the next Esu Ijelu festival is slated for end of April, and would, as usual, host many dignitaries, worshippers and culture promoters across the world.  Already preparation for the communal festival is in top gear as the grasses around the shrine have been cut by the youths under the supervision of Obaloro.

Chief Olasusi Oluwasegun of the Atiba family: “We need some help concerning the shrine of Esu Ijelu. We want it properly renovated. We want the place fenced and decorated to look neat and modern.

“The festival has the potential of becoming a world renowned tourist centre like that of the Osun Osogbo festival, Eyo festival in Lagos and Olojo festival in Ile-Ife. We urge government, culture promoters and private individuals to assist us in this regard.”

Share
Facebook
Twitter
WhatsApp
Previous article#BBNaija: Cee-C Is All Shades Of Gorgeous In New Makeup Photos
Next article2019 Presidency: Buhari Reveals How He Will Destroy Cabals If He Wins Election
- Advertisement - Ad ==> TRUTH FINALLY OUT! Discover how a young Nigerian graduate now makes a consistent 40k per week doing a legitimate online business. You too can start yours now, click here!!!