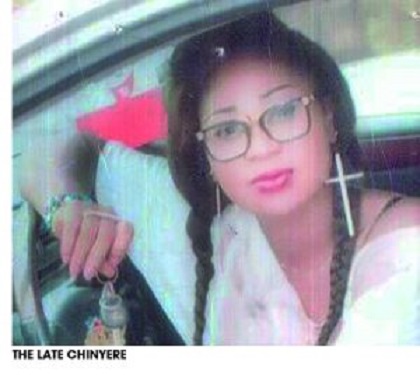 Nine months after the crime, Kpoobari Lebe, 31, suspected in the murder of 25-year-old Jovita Chinyere, was recently arrested by the anti-kidnapping squad of the Rivers State Police Command. Lebe is a member of  a killer gang  alleged to have kidnapped and killed the victim and disposed her corpse in the waterside area of  B-Dere Community in Gokana Local Government Area of Rivers State.

According to the Police, the remaining two members of the gang are still at large. The motive for the murder was jealousy borne out of suspicion that the victim, who was one of the men’s girlfriend, was double-timing.

Rivers State Commissioner of Police, Ahmed Zaki told Saturday Sun the three-member gang was led by Dumbari Biiro, described as a kidnapper, a murderer, and the boyfriend of the deceased. He alleged that investigation indicated that the victim, Jovita Chinyere, received a phone call in Port Harcourt from Biiro on June 17, 2017, shortly before she was kidnapped.

Zaki explained that Biiro and his gang, comprising of Kpoobari Lebe and Monday Ngang, forcibly took the deceased in her red Toyota Corolla car to the forest on that fateful day of June 17.  Biiro, after shooting her, allegedly delegated the duty of dispatching her corpse to Lebe and Ngang who threw the body in a waterlogged area of the community.

When Ngozi Anukem, a relative of the victim, went to the State Intelligence Bureau of the River State Police Command to report her missing relation, the only fact she had was about a phone call received by the deceased before she took off for an unknown destination. Operatives of the SIB swung into action and at the end of the day, arrested a suspect, Dumle Piira, from whom they recovered the  phone of the missing person. It turned out the phone was sold to her by Dumbari Biiro and Kpoobari Lebe. Piira, subsequently arraigned before a magistrate court, has since been remanded in a Port Harcourt prison.

The next breakthrough was the arrest of Kpoobari Lebe, on March 1, 2018. The suspect, subsequently, led detectives to the waterside location where the body of the victim was thrown into the river. The recovered corpse has been deposited at the UBTH mortuary in Rivers State.

In the meantime, Jovita’s Red Toyota Corolla Car, now sprayed black, is said to be in possession of her killer boyfriend, Biiro, who is also alleged to have coveted the deceased’s ATM cards and other valuables.

From Lebe, the nabbed suspect, came this spine-chilling account of the crime: “We are a three-man gang of kidnappers. We have been involved in over 10 kidnappings and murders in Rivers State. Our leader, Dumbari Biiro, who was befriending Jovita Chinyere (deceased), complained that his girlfriend was having an affair with another guy. On June 17, 2017, he called her over the phone and kidnapped her in her red Toyota Corolla car in PortHarcourt and brought her to B/Dere community.

“He met us, myself and Monday Ngana, and Bardrin King, he told us to follow him inside the car. We both entered the car and we drove into the forest. Biiro ordered Chinyere to come down from the car, but she refused. Abruptly, Biiro brought out his gun and shot her and she died.

“He ordered us to take Chinyere’s corpse and throw her inside the river. He then drove away with her car and other valuable items.”

Lebe, himself a native of Gokana Local Government Area, affirmed that “myself and  Biiro sold Chinyere’s phone to Dumle Piira for the sum of N30, 000.”

He has been cooperating with the police since his arrest on March 1. Beside giving a full confession, he took detectives to the crime scene and helped in recovering the corpse of the victim. Following his arrest, his other gang members, Birro, the gang leader, and Monday Ngana, had vanished into thin air.

Ironically, Lebe who attested to having “been involved severally in kidnapping and murder,” insisted: “I didn’t shoot her, I only threw her corpse inside water.”

Commissioner of Police Zaki affirmed that the victim’s family are yet to conduct a burial for their deceased  daughter.  “Investigation is still on,” said Zaki. “Police is still hunting for the other two suspects. We enjoin the public to give us useful information.”