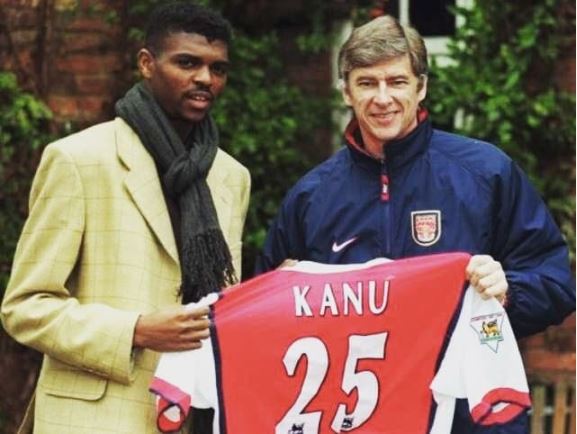 He took to his Instagram page to pen down the note below:

“Big shoes for anyone to fill, playing for Arsenal under Arsene was one of the best period of my career, 2 premiership, 2 FA cups, The invincibles, playing with some of the best assembled players, influencing millions of fans in West Africa to support this great club are some of the memories that come to fore today but above all the privilege to have played for a gentleman like Wenger is most cherished.”

Nwankwo Kanu, OON, or simply Kanu, is a retired Nigerian footballer who played as a forward. He was a member of the Nigerian national team and later captained the Eagles for 16 years from 1994 until 2010.

In February 1999, after just twelve games and one goal for Inter, Kanu was signed by Arsenal for approximately £4.15 million. He made his debut for Arsenal, against Sheffield United in the FA Cup.

He played 197 games for Arsenal, scoring 44 goals. In the summer of 2004, after his contract with Arsenal ended, he moved to West Bromwich Albion on a free transfer. In 2008, Kanu was voted 13th in the “Gunners’ Greatest 50 Players” poll.