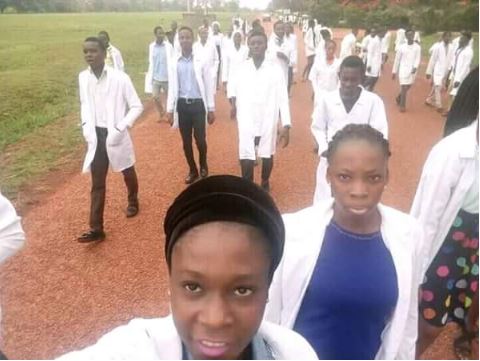 Medical students of Kogi State University College of Health Sciences stormed the Senate building of its institution to protest the continued non accreditation of their faculty.

Students in the faculty have been stagnant for over 5 years now without professional examination to qualify them for clinical training in the teaching hospital.

The protesting medical students demanded that they be addressed by the Vice Chancellor on the plan the school has for them. The students decried the negligence they have experienced from the institution and the state government since they were admitted.

The College of Health Science has three sets of medical students of which two are still in 200level (A and B) and the other 300 level. The state had earlier set up a committee in December 2016 to work within six weeks and give them feedback, but the committee was reported to have worked for 12 months.

According to the students who spoke on the condition of anonymity, the committee was supposed to recommend the Federal Medical Centre in Lokoja, but “decided to go for an upgrade of an ill-staffed, unequipped and structurally backward diagnostic hospital in the town of the University for selfish reasons.

“The state has been unable to start anything on the site despite approval of the budget which sits at a wooping 1.7billion Naira” the students said.

Consequently, they said they have not been able to write their first professional examination as consultants are running away from the school, demanding that the Federal Medical Center in Lokoja be used temporarily as their teaching hospital.

However, the Vice-Chancellor was not on seat to address the frustrated students.

He was said to be on an official assignment to the state capital.