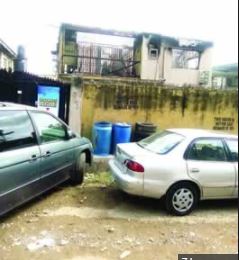 According to a report by Punch Metro, sympathisers thronged Alade Close, Ikeja, Lagos, on Tuesday after an early morning fire claimed the lives of a middle-aged businesswoman, her teenage maid and houseboy.

The deceased lived in a two-bedroomed apartment on the top floor of a one-storeyed building on the close.

Punch Metro reports that the woman’s husband and their daughter escaped from the fire, which started around 2am from their living room and spread to another two-bedroomed flat on the floor, whose occupants escaped unhurt.

Although the cause of the fire had yet to be officially determined, some residents claimed that it was caused by an electrical surge.

It was learnt that the houseboy, identified only Nonso, had wanted to use the toilet when he met fire burning in the living room and raised the alarm.

The couple were said to have fled downstairs with their child while Nonso battled to rescue the housemaid, who was trapped in the inferno.

Punch Metro reports that when the woman did not see the domestic helps, who were said to be her relations, she returned to the apartment in a desperate attempt to rescue them.

The three of them were thereafter trapped, as residents and men from the Lagos State Fire Service and the state emergency management agency fought to put out the raging fire.

During a visit to the scene of the incident, Punch Metro observed that the roof  of the building and several household items had been razed.

A Toyota Camry and a Lexus RX 300 reportedly owned by the couple were parked outside the residence.

Grief filled the vicinity, as relatives and neighbours of the victims thronged to the scene, lamenting the incident.

Most of them approached Punch Metro said they were too distraught to speak on the tragedy.

However, a resident, who lives near the affected house, said he was woken up by a distress call from the house and rushed out to assist in extinguishing the fire.

The eyewitness, who did not want his name in print, said the three corpses were brought out from the flat around 5am after the fire had been put out.

He said Nonso had just returned from his village in the eastern part of the country to deposit his late father in a morgue, adding that he was the only son of his parents.

He said, “The man was a customs officer while his wife worked with the Federal Road Safety Corps, but I do not know their names. I only know Nonso, their houseboy. The woman also has a big shop at Alade Market.

“The fire started around 2am. People said the fire was caused by an electrical surge. The man escaped with his daughter. When they got downstairs and noticed that the domestic helps were still in the apartment, his wife returned to look for them. But by the time she got upstairs, smoke had filled everywhere.

“The husband wanted to go into the apartment too when he realised that his wife and the domestic helps had been trapped. I was the one who held him. He wondered what he would tell his in-laws when he got back to the village. The domestic helps were relations of the wife. The family was preparing for the burial of Nonso’s father.”

The resident stated that the woman’s husband was distraught when he learnt about the deaths, adding that he had been rushed to a hospital.

The security man in charge of the affected building, who gave his name only as Mutari, said he was preparing to sleep around 2am when he heard an explosion.

“The fire started from the family’s living room. I was hitting the gate and shouting that there was fire. I called them to come out. Oga (the man) came out with his daughter. His wife rushed back upstairs. She said she wanted to put off the fire, but oga warned her not to go.”

Muntari could not finish sharing his experience with Punch Metro as a resident instructed him to stop talking.

“We are grieving!” the resident said.

The Acting Director, Lagos State Fire Service, Mr. Rasaki Musibau, said the agency mobilised emergency responders from the Alausa and Ikeja fire stations to the scene after it was alerted to the fire around 3am.

Musibau, who spoke through the Public Relations Officer of the agency, Shakiru Amodu, said the corpses were handed over to policemen from the MAN Centre Division, adding that the cause of the fire had yet to be ascertained.

He urged people to be safety conscious and promptly report fire outbreaks via the toll-free emergency numbers – 112 and 767.

He said, “The incident was not reported through the emergency numbers. It was a resident, one Alhaji Adamson, who called one of our officers, who in turn alerted us to it.

“By the time we got there, the gate of the close was still locked. When you have an emergency at hand and the gate is locked, how do you get help? If you are secure, you may not be safe. But if you are safe, you are secure because safety is all encompassing. According to the man, he was communicating with his wife, who said she could not find her way back downstairs.”

Musibau advised residents to arrange their homes properly so that they could navigate their way to safety during emergencies.

He said, “People should learn how to escape from smoke-logged environment. Try to lay down low because smoke is thicker than air. There is still some level of air on the floor; everywhere cannot be saturated with smoke.

“If you go down and you can walk down through the wall, it will lead you to the door. That is why we advise people to arrange their homes in such a way that they can close their eyes and walk to their doors. Use the back of your hands to fill the wall. If there is an electrical shock on the wall, you will only respond to the stimuli and move on; the shock will not grab you. But when you use your palm, the shock will grab you.”