Mantu Is A Hero…Every Election In This Country Was Rigged – GEJ’s Ex Aide, Doyin Okupe 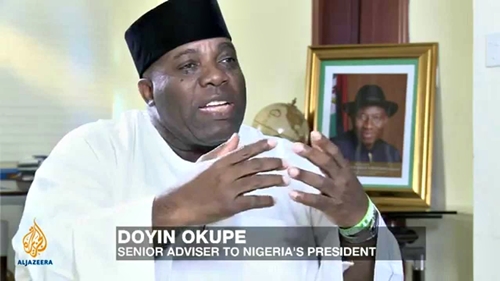 While speaking through his Facebook page, Doyin Okupe, who is an aide to former President Goodluck Jonathan, reacted to former deputy senate president, Ibrahim Mantu, who confessed of rigging elections for the former ruling Peoples Democratic Party (PDP), saying that Mantu “spoke as a true compatriot” and should not be misrepresented, adding that all elections in the country are rigged.

It may be difficult for us to make serious progress as a Nation. Most of us leaders and followers are Hypocrites, and dishonest individuals.Very few think about the interest of the country and we play politics with everything.

Mantu spoke as a true patriot who desired true and genuine change.. The media is suddenly awashed with a cacaphony of misrepresentations and distortions on what he said. Suddenly the substance of his honest disposition is lost to partisan blame game that has not advanced our course of history in anyway.

For the avoidance of doubt ALL elections were RIGGED in Nigeria from 1959 to date, without ANY exceptions.

This rigging is all encompassing and involved all political parties from action group, Ncnc, Npc to Nrc,Sdp and pdp, ad, acn, cpc, apc etc.

If anyone says anything to the contrary such persons are wilfully perjured individuals and the true enemies of progress in Nigeria.

People like Ibrahim Mantu and late President Yaradua who even openly admitted that the election that brought him to power was faulty, are heroes of this country.

Parties in Nigeria rig both intra and inter party elections from wards through local governments all the way to National elections from time immemorial.

For a truth it is only in the southwest and a few other zones that a modicum resemblance to an election actually do take place. in most other parts of the country Nothing like elections take place or better still the charade of people lining up and casting their votes is just a mere ritual that has nothing to do with the results announced.

Perhaps the most crooked of all electoral umpires we have had so far is Attahiru Jega who cynically brought in Professors to glorify the electoral Fraud supretended by him throughout his tenure.

Inec participates and drives tbe rigging process from the ward to national. Police , DSS and all other agencies involved in our elections are accomplices.

How can anybody claim that only PDP rigs elections in Nigeria.

It is in our overall interest that we take what Mantu said seriously and for posterity’s sake, let us sit down and plan how to conduct proper free and fair elections in our country.

Democracy is mocked if people have the right to vote but their votes do not count. it is a societal abomination, a desecration of our core values, and a shameful disgrace on us as a nation. True modernity and civilization will elude us if we cannot by adult suffrage elect credible candidates, stop or remove non performing elected officials simply because they already occupy elective posts or belong to an entrenched party .

The only recourse the citizens have is the power of the ballot and if it is rendered ineffective by gross electoral fraud and widespread malpractices then our Nation will be nothing but a grand Animal kingdom to borrow Nnamdi Kanu’s words.