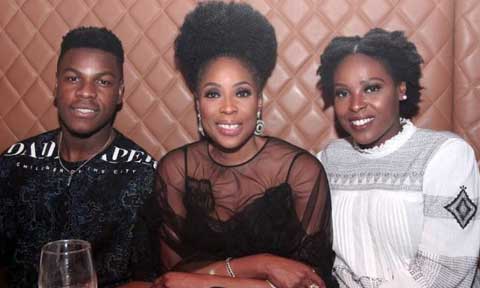 Nigerian filmmaker and CEO of Ebony Life TV Mo Abudu has received criticism after she hosted Nigerian Hollywood actor and film maker john Boyega to a dinner date. John Boyega is currently spending a good time in the soils of Nigeria after a successful production of his movie Pacific Rim (the uprising).

He recently revealed that he wants to produce some Nollywood movies and as estimated a sum of 9 billion naira for a very low budget movie, this has captured the interest of many Nollywood investors.

Top Nollywood stars and colleagues of Ebony Life CEO were present at the dinner for Boyega. Also present was Temide, the daughter of Mo Abudu who is also her mother’s right hand.

Mo shared photos from the evening of herself and in one of the photos, she sat in between her daughter and the 26 year old successful Hollywood John Boyega.

Nigerians who were quick to sense this act commented to let her know that they understand her intention.

Captioning the photo she said; “#EbonyLife dinner with @johnboyega. Beautiful evening. My Temidee looking so pretty.

iam_tutuh: Mum.. Are you trying to match make us? Lol