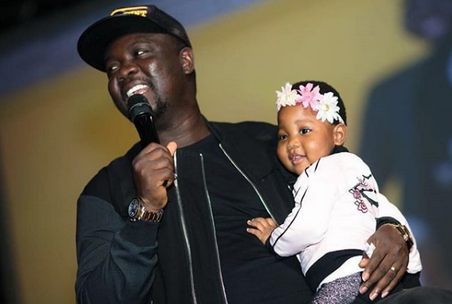 It seems ace comedian Seyi Law is already preparing the stage for his daughter Tiwaloluwa. In a recent comedy gig, the comedian performed with his one-year-old daughter and they both succeeded in worming their way into the hearts of the audience.

From the clip, the proud father was seen asking Tiwa various questions ranging from the name of her country, to the name of the governor of Lagos State, and Tiwa answered correctly, triggering hearty cheers from the audience.

This is the first time the comedian would be spotted performing with Tiwa and in a chat with Saturday Beats, he revealed that the questions were not rehearsed. He said, “No, we did not rehearse before I brought her on stage.

It was only the audience that was shocked by her brilliant responses, I was not. She has been taught a lot from school and those were part of what she was taught. I have always put her in front of the camera and so she didn’t have stage fright. I try as much as possible to build her confidence as I suffered serious inferiority complex growing up.”

Speaking on how he was able to rid himself of inferiority complex, the humour merchant simply said, “I had to study more and learn to get involved in discussions more intelligently. I would say my intelligence helped me.”