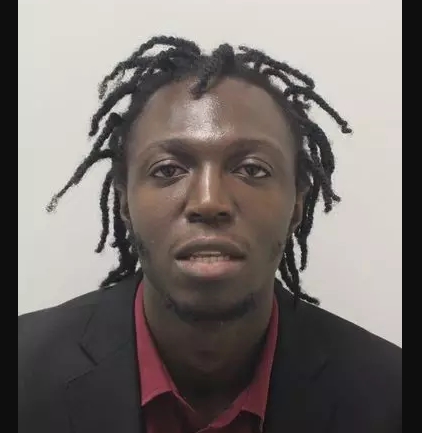 A member of an organised crime network who modelled himself on real and fictional gangsters, was jailed at Harrow Crown Court on Thursday, 26 April for nine years and three months.

Oluwatobi Sunmonu, 26 (28.06.91) of Artillery Place, Woolwich was arrested as a result of an intelligence-led investigation carried out by the Met’s Trident and Area Crime Command.

His co-conspirators, Toni Ferry and Iyisha Levine, were also arrested.

On 20 May 2017, officers searched a room at the Queens Hotel Bayswater where they found four bags locked with padlocks. The bags were found to contain:

– A large quantity of live ammunition;

– A large quantity of component parts of ammunition;

– A large quantity of Class A drugs (cocaine and heroin).

Detectives also discovered a false driving licence in the name of Thomas Corleone. The picture on the licence was of Sunmonu, who they identified after reviewing CCTV at the hotel. He was arrested by officers at a later date.

Detectives believed Sunmonu modelled the structure of his gang and the way he conducted his criminality on both real and fictional gangsters.

A book titled “The Supreme Team” was found locked in Sunomnu’s safe which details the rise of an organised crime syndicate in New York City in the 1980s. In correspondence between Sunmonu, Ferry and Levine, Sunmonu often referred to his group as The Supreme Team.

Ferry, Sunmonu’s girlfriend, had assisted in renting and paying for the hotel room where the drugs, firearms and ammunition were stored. The group paid in excess of £28,000 to rent the room over one year and five months.

Ferry and Levine played a key part in Sunmonu’s drug enterprise, and would stay in hotel suites for days at a time, preparing and packaging large quantities of Class A drugs ready for distribution.

Officers also discovered a number of firearms had been purchased and delivered to Ferry’s home address in Islington.