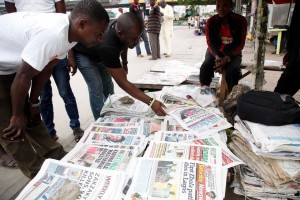 The Nigeria Police has announced that the stolen mace from the Nigerian Senate has been recovered.

Chairman, Presidential Committee on Small & Light Weapons, PRESCOM, Ambassador Emmanuel Imohe, has blamed the current strife between herders and farmers on unscrupulous arms merchants who are taking advantage of Nigeria’s porous borders to flood the nation with illicit weapons.

How senator escaped from mace thieves’ car, by Aide

Vice President Yemi Osinbajo has expressed concerns that the national budget for 2018 is yet to be passed after seven months with the National Assembly.Osinbajo, during a visit of The Companion, an association of Muslim men in business and professions in Abuja, said the presidency is expecting speedy passage of the budget, and would continue to interact with the legislators for a positive outcome.

The All Progressives Congress (APC) in Kwara state Wednesday suspended a former member of the House of Representatives, Hon. Mashood Mustapha.

Ahead of the 2019 general elections, Christian Leaders under the auspices of United Christian Leaders Eagle Eyes Forum (UCLEEF) have called on Nigerians irrespective of religious, ethnic and political inclinations to “awake and save our dear nation” as it is the citizenry that have the power, right and choice to make the country great again.

Hawkers in Federal Capital Territory (FCT) have pleaded with the government to provide affordable shops and soft loans for their businesses to curb street hawking within the territory.