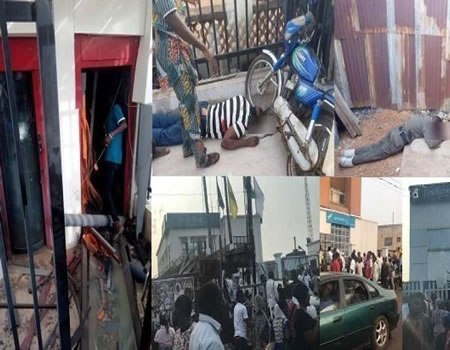 The Offa robbery which claimed the lives of about 50 people still has the nation in shock at the sheer audacity of the operation and the cruelty of the bloodbath that followed.

According to the Punch, a brother of one of the victims Mr. Muftau Adeyemo, narrated how his sister Mrs. Kuburat Salam was in the police station to report a voyeur who was looking in on her while she was having a bath.

The thieves hit the police station with the aim of disabling the officers there so that the operation would run smoother.

Telling her story, her brother said;

“Salam was killed. She went to the police station. My sister was married, she was about 40 years. She was living in a ‘face-you-and-face-me’ apartment. She was bathing and a young man was living in that compound. A guy came to visit him. He walked across the bathroom where my sister was bathing, and I learnt he was peeping into the bathroom. My sister confronted him and said, ‘you are not living here and you just came to peep at a woman bathing?’ The man ran away.

“When my sister’s husband came back home, they went to the shop of the young man living in that compound. They met the man who was peeping and he started fighting my sister. So, the people around advised that my sister should report the man to the police. She went to the police station and the police arrested the Peeping Tom and his friend and detained them.

“On the second day, the neighbours pleaded that the men should be released and that we should withdraw the matter. The police said my sister who reported the case must be at the police station before the men could be released. My sister then went there and  the matter was settled. The two young men went away.