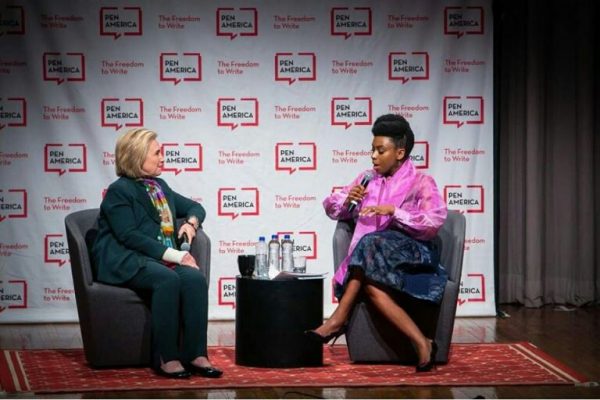 For starters, I am a huge fan of Chimamanda Ngozi Adichie. She is intelligent, she is beautiful (although not in the context of our slay queens yet to discover themselves), she exudes a certain aura that commands likeability. I’ve had to read two of her literatures, and I am in constant search of her essays. She radiates a certain blend of the past and the present, which must have led the late Chinua Achebe to describe her as being “blessed with the gift of storytelling of the ancient.” However with the current statement credited to her during an interactive session with former United States presidential aspirant, Hillary Clinton, on the latter’s choice of her marital status as the foremost feature of her twitter bio, I think our beautiful dame crossed the line for many reasons to be shown anon.

Even though I am yet to read Adichie’s, We Must all be Feminists, i have followed at a measured distant her ‘sermonizations’ and ‘pontifications’ on the subject and have since come to the inevitable conclusion that she seems to be drunk on her strange brand of feminism. She seems to blur the thin lines between “feminism” and “womanhood” forgetting that the existence or circumstances of the latter does not necessarily obliterate those of the former. Her brand of feminism i have come to notice have no room for dissent. It is one very large omnibus where every single woman must travel in. It is not by any accident therefore, that the title of her book on the subject reads─WE MUST ALL BE FEMINISTS!

How was it so difficult for our lady to understand that the fact of being a wife does not necessarily transmute to some kind of submission to patriarchy which seems to scare Chimamanda out of her wits. From whence did she get her own notions of feminism that censures the right or choice of married women to make a lavish display of the fact of their marriage; whether as former first ladies in the streets of New York, or merchants of akara and bole in the streets of Lagos? How come it’s so difficult for Chimamanda to appreciate the fact that feminism has no quarrels with the institution of marriage, but equality of gender, and demystification of patriarchy?

I cringe to come to terms with the fact that for our award winning author, Mrs. Clinton is better off described as say, lawyer and former secretary of state of the United States of America. Or perhaps former presidential aspirant in her twitter profile before acknowledging the fact of her being a dutiful wife to a former president. Now, apart from the fact that it makes no difference whichever way Mrs. Clinton chooses to write her twitter bio as neither of those takes away the fact of her being a strong willed woman and an amazon of inestimable values, it is completely pedestrian and waters down more serious issues that has agitated the minds of feminist thinkers, to be concerned with whether married women should hold themselves out as wives of their husbands or not.

Chimamanda Adichie’s expectations of Mrs. Clinton overlooks the fact that as much as those portfolios that represent the Clinton brand aptly resonates her feminine power, it pales away in the face of the fact that most of those paraphernalia of her personality might not have accrued to her, but for the fact of her marriage to the former president Bill Clinton; whose personality arguably launched her into political prominence. And so, if she elects to push forth her conjugal personality before other corporate and/or political personality, it does not automatically make her a naive woman who is not schooled in the jurisprudence of feminism. This is the danger of Chimamanda’s brand of feminism. It is one that has no accommodation for choice and which ironically repudiates the ethos of equality which is the hallmark of feminism by the way.

In Chimamanda’s feminist thought, a married woman who does not make obscure the fact of her matrimony is a lesser woman when compared to the one who keeps her marital status in the closet and brandishes the exploits of her career. The category of women described in the former perhaps would not be fit for her “feminist kingdom of God”. However, this does not seem to be the legitimate concerns of feminism. It is one that drapes feminism in the garb of a warlord seeking to do battle with patriarchy and liberal feminism.

Perhaps we should educate our lady that feminism, like justice, is rooted in equality. It advocates for equality between the male and female gender as much as the ethic of care, rests on the premise of non-violence; or that no one should get hurt. It does not necessarily emphasise the whittling down the institution of patriarchy and institutionalizing matriarchal hegemenoy. For completeness, the Oxford Advanced Learner’s Dictionary, 8th Edition defines “ Feminism” at page 545, as “ the belief and aim that women should have the same equal rights and opportunities as men; and the struggle to achieve this aim”. Nothing more. It does not dwell on the inanities that has become the hallmark of Adichie’s brand of the subject and which led her into that poser the other day.

The four major schools of Feminist Thought namely, the Liberal, the Radical, the Cultural and the Post Modern while they interrogate the concept of feminism from different angles which might not be necessarily discussed here, none of the schools confront the subject in simplistic manners such as whether the woman should make dinner for the husband or not and all the other fiddle-faddle that characterise Adichie’s sermons, but rather attempt to engage the legal system and sociological assumptions and/or construct that give life to patriarchy.

I think Chimamanda’s problem stems from the fact that she sees herself as the Albert Einstein of the subject of Feminism, hence why she goes about dictating to those who would listen, the extant codes that define it, even where they are out rightly bland as in the instant case.

The interaction the other day I think should present an occasion of introspection over her understanding of the concept of feminism. She is intelligent, she is the darling of the west, but she is not the proverbial chief priest without whose presence divination to the ifa oracle is impossible. She is not the overlord of the concept of gender-equality so as to legislative and pontificate at the wave of a hand on its nuances and intricacies.

I do not know if Chimamanda is married yet, but I fear that her question the other day to the former presidential aspirant at its extreme, purports to overrule the institution of marriage. And this is where the vacuity and poverty of that line of reasoning reveals itself. It falls short of the admonition of one classical writer on the subject, Adams K, as narrated by M.D.A Freeman, in Lloyd’s Introduction to Jurisprudence, 8th Edition thus, “feminist scholars and activists need alternative modes of discourse through which the analyse controversial choices made by women: forms of discourse that acknowledge the possibility that women may be influenced by the internalization of the very ideology that has subordinated them, yet avoid the claims of determination that alienate women, facilitate the misrepresentation of their decision making capacities and impede inquiry into contributing causal factors which may be more readily subject to remediation”.

In coming to a closure, we recall that it was Socrates who admonished that moral virtue is only attained by avoiding extremes in behaviour. Perhaps we should refresh Chimamanda Adichie’s mind on this, as we believe she knows it. And what is more, this Socratic wisdom accords with the views of two dominant schools of feminism; the liberal and the cultural schools that accommodate relationship. In the same vein, we beg to advise that the extreme posturings in her campaign for feminism ought to be neutralised, a little to the centre, in order to find accord with the institutions and values that has been held sacrosanct by any civilisation; such as marriage and its capacity to alter the status and personality of an individual.

Nkannebe Raymond, a legal practitioner and public affairs analyst wrote in from Lagos. comments and reactions to [email protected]