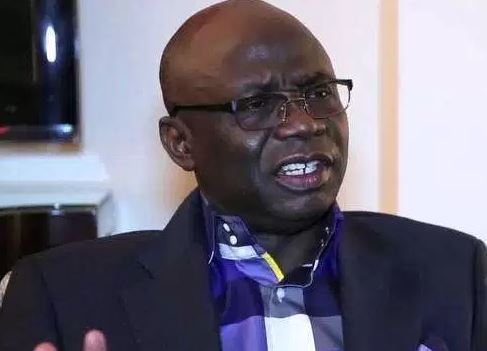 Founder and Senior Pastor of the Latter Rain Assembly, Lagos, Pastor Tunde Bakare, has reacted to the declaration by President Muhammadu Buhari to contest for Presidency come 2019 election.

President Buhari had announced his intention to go for second term at the National Executive Council meeting of the APC held in Abuja on Monday.

Reacting to the new development, Bakare, speaking to Daily Sun said he would support Buhari’s re-election bid if he (the president) canvassed for his support.

According to him, Buhari has every constitutional right to seek re-election.

Bakare said “I would support Buhari If he canvasses for my support.

Bakare, speaking on whether he would cast his vote for the President during the election, said “It is a secret vote, for that it remains my secret.”

Bakare further warned Nigerian to be careful, even as the 2019 election drew near. He urged Nigerians not to confuse ‘electrocacy’ with ‘democracy.’

Recall that Bakare had recently flayed President Buhari over his attitude towards the kidnap of students of Government Girls’ Science and Technical College, Dapchi, Yobe State.

Miffed by the President’s presence at the wedding of Idris Ajimobi, son of Governor Abiola Ajimobi of Oyo State, and Fatima Umar Ganduje, daughter of Governor Abdullahi Ganduje, in Kano, pastor Bakare, while speaking during a Sunday service, in Lagos, said he could not comprehend what President Buhari and other governors were doing at the wedding when other peoples’ daughters were in captivity.