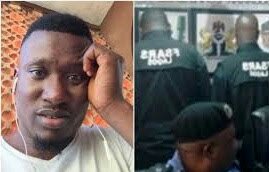 The Lagos State Police Command has arrested five operatives of the Special Anti-Robbery Squad for allegedly harassing a businessman in the state for bribe after seizing his company documents.

The state Police Public Relations Officer, SP Chike Oti, said the men were attached to the Ipakodo base of SARS.

“They are currently undergoing interrogation at the command’s X-Squad Section and will be marched before an adjudicating officer at the Police Provost Department for the commencement of their orderly room trial.”

Meanwhile, a group, Network on Police Reform in Nigeria, has commended the police for swiftly acting on the allegations.