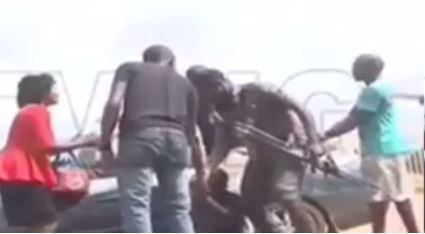 Some officials of the Nigeria Prisons Service have been captured on camera brutalising a man in Edo State.

In the video, which was published by ITV.NG, a Prisons official was seen slapping the man while a woman, believed to be his wife, pleaded with them.

According to reports, the Prisons official began brutalising the man after the car they were driving and the man’s car had an accident.

Reports claimed the man was beaten into a coma.

In the video, the woman, who is believed, to be the man’s wife pleaded with the Prisons official to spare her husband, saying “please, he is a father of three children.”

The incident was said to have occurred along Reservation Road, GRA, Benin.