Revealed: 5 Times The Mace Has Come Under Serious Attack In Nigeria’s History 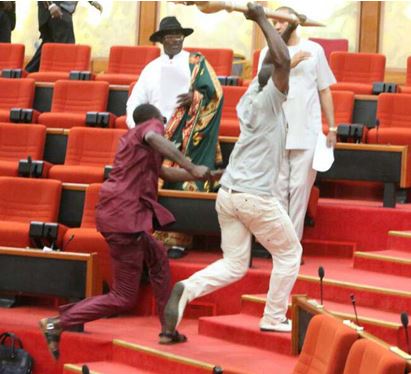 The mace being stolen from the senate

We go back in Nigeria’s history to present five such instances where the mace has either been stolen or used as a weapon of mass destruction.

Chief Obafemi Awolowo was Premier of the Western Region in 1962 when Prime Minister Abubakar Tafawa Balewa tried to impose a state of emergency in Nigeria’s western region.

It was a move that didn’t sit well with Awolowo.

As lawmakers deliberated Balewa’s position in the Western regional assembly on May 25, 1962, Mr. Ebubedike (from Ozubulu in Anambra State) who represented Ajeromi/Ifelodun/Badagry East in parliament, seized the mace and deployed same as a head battering weapon; with a fist fight breaking all around him.

As chairs were flung all over the floor of the House, Ebubedike grabbed the mace and dared anyone to come close. When the Speaker, Hon. Prince Adeleke Adedoyin and other lawmakers came close, Ebubedike used the mace on them.

The mace as a weapon of head destruction was thus born in Nigeria.

Chuba Okadigbo was president of the fourth senate when then President Olusegun Obasanjo began moves to impeach him by using presidency loyalists in parliament.

Okadigbo snatched the mace and took it to his house in Abuja–all in an attempt to stall his impeachment.

When the police arrived Okadigbo’s residence to retrieve the mace, he told them they were only going to get the mace if they killed him.

“They told me they had come to collect the mace and that they were acting on orders from the Inspector General of Police. I said I would never give them the mace. I have to be dead before you get the mace, I told them.

“This is executive lawlessness and is unprecedented in Nigeria’s history,” Okadigbo fumed.

After the police left his residence, Okadigbo (fondly called the Oyi of Oyi) took the mace with him to Ogbunike, his home town in Anambra State, and left the senate’s symbol of authority in the custody of a seven foot python.

Okadigbo lost the battle to remain senate president, however, as he was impeached weeks later.

When Speaker Otelemaba Amachree, convened a session of the legislature to amend certain portions of the Rivers State budget on July 9, 2013, he didn’t know trouble was brewing in the horizon.

Hon Evans Bapakaye Bipi who represented Ogu/Bolo constituency, arrived the Rivers House of Assembly with thugs, pounced on house leader Chidi Lloyd and the mace was next.

Reports say a fake mace had been smuggled into the house by the anti-Amaechi lawmakers in an attempt to unseat the speaker.

Rotimi Amaechi is a serving minister and was Governor of Rivers State at the time.

Evans Bipi then walked up to Chidi Lloyd who was a pro-Amaechi lawmaker and slapped him in the face. The speaker who had just arrived the chamber, tried to prevent the slaps and shouting from becoming a full blown fight, but Bipi went for him too; the (fake) mace in his vice grip.

Hon Lloyd then seized the mace from wherever and used it to attack Hon Chinda.

Chinda ended up in a hospital from mace beating.

On June 23, 2015, lawmakers in the federal House of Representatives didn’t like the fact that the APC was trying to decide their principal officers from Bourdillon, Lagos.

So, they went to war among themselves.

The poor mace couldn’t but heave a sigh of relief after.

The APC and PDP lawmakers engaged themselves in a free for all fight at plenary when the speaker of the Benue Assembly, Mr Terkimbi Kyange, read a letter from the APC.

The letter read that the APC was the majority party in the house following the defection of a PDP legislator.

As tempers flared and blows rained, the Sergeant At-Arms quickly removed the mace from harm’s way.

So, yes, Omo-Agege of Delta Central is pretty much in good company.