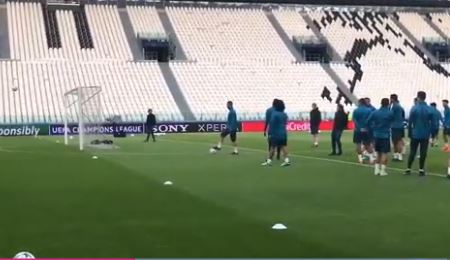 Cristiano Ronaldo stunned the world with his overhead kick against Juventus last night – but the Real Madrid striker topped it in training before the match.

In doing so, he became the first player in the competition’s history to score in 10 consecutive games.

But despite his second goal taking all the headlines, the former Manchester United star produced a real moment of magic in training before the game.

In the clip, filmed before Tuesday’s match, Ronaldo can be seen standing behind the goal-line as his team-mates take part in a practice drill.

He then picks up the ball and hoops it forward before it pitches just in front of the net.

Incredibly, the ball then spins backwards and hits the back of the net.

Unsurprisingly, the footage has gone viral after Ronaldo’s heroics in Turin yesterday.

And it comes after an astonishing clip emerged showing Juventus fans sportingly applauding the forward’s strike.

Even Zinedine Zidane, himself a master of scoring jaw-dropping goals, could not believe his eyes.

Real went on to win the clash 3-0, leaving them with one foot in the semi-finals of the competition.

Few will bet against them securing an unprecedented third Champions League title in a row.